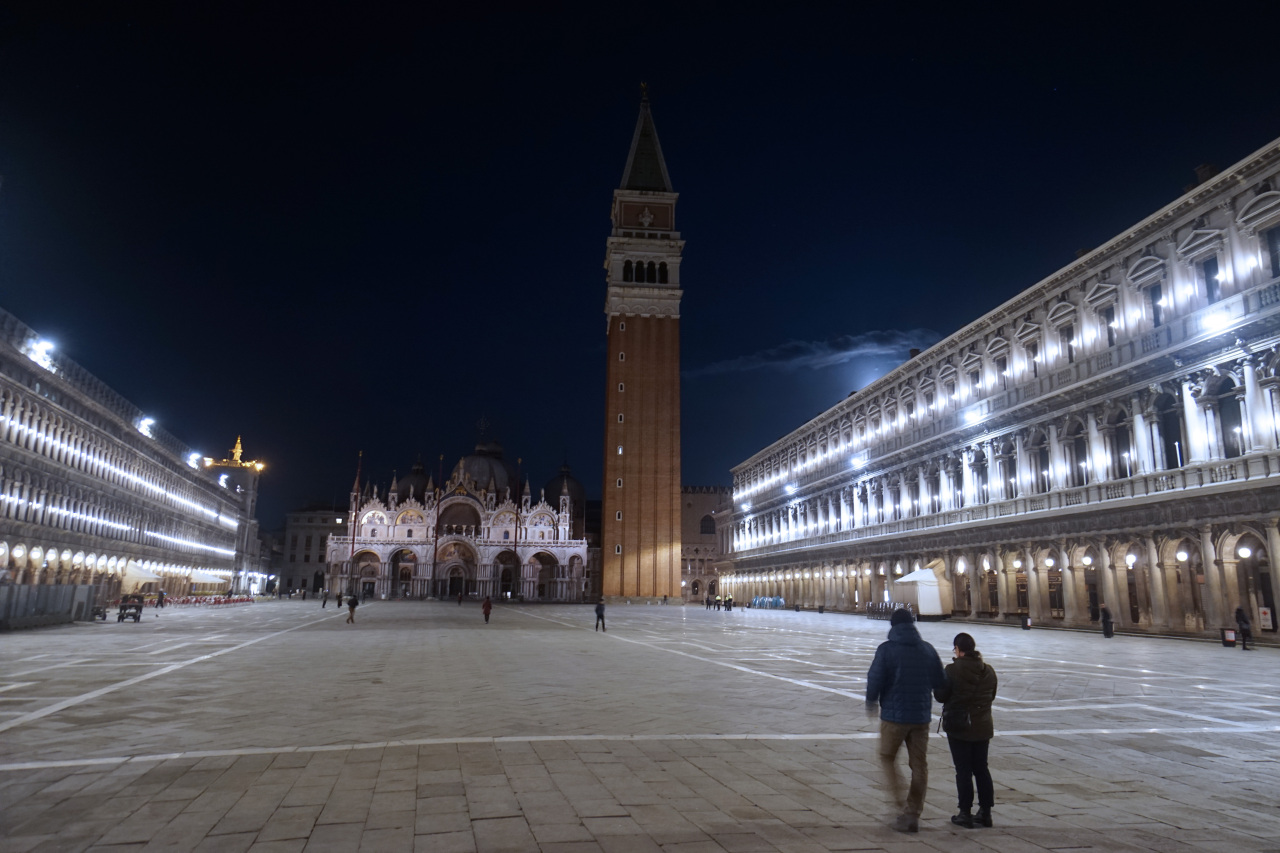 People walk in an almost empty St. Mark`s Square in Venice, Italy, earlier this month. (AP-Yonhap)
Around 600 South Korean nationals in Italy are set to be evacuated on government charter flights home next week, as the grim tally of coronavirus cases and deaths continues to surge.

There are 151 people in Rome and 430 in Milan who will fly on the charter flights, according to Seoul’s Foreign Ministry on Wednesday. A majority of the passengers are Korean citizens and some are foreign family members.

The Korean government will send two flights to the country -- one will depart next Tuesday from Malpensa Airport in Milan and the other will leave the next day from Fiumicino International Airport in Rome.

The passengers are required to pay around 2 million won ($1,620) airfare.

Upon arrival, they will be transferred to a temporary shelter and stay there for three to four days to be tested for COVID-19 at least twice. If anyone tests positive, everyone has to stay at a government-designated facility to be quarantined for two weeks. If the results are negative, the returnees have to self-quarantine at home for two weeks, which is mandated for all arrivals from Europe.

Initially Seoul wasn’t planning an evacuation mission to Italy, stressing that a government flight is the “last resort” when all other forms of transportation are shut down. But when the coronavirus crisis worsened and it became difficult for Koreans in Italy to arrange a charter flight on their own, the government decided to chip in.

As of Wednesday, Italy confirmed 69,176 cases of COVID-19 and the death toll reached 6,920 -- highest in the world and double that of China, where the coronavirus originated last year.

As the COVID-19 pandemic continues to spread across the world, a growing number of Koreans living in hard-hit countries are seeking to flee home. They feel safer here, since Korea has seen some progress in curbing the outbreak.

Korea reported 100 new cases Wednesday, bringing the total infections to 9,137. Despite a marked slowdown from last month, the number of imported cases is on the rise, with 51 cases reported among the new cases on the day.

With more charter flights and a rush of returning Korean nationals underway, Seoul’s health authorities are anxious to contain the potential influx of imported cases.

In Germany, where 32,991 have been infected and 159 have died, some Korean nationals are also seeking to return home. The association of Korean residents in Germany has been checking to see how many people want a seat if a charter flight can be arranged, as most flights between the two countries are suspended for the time being.

Asiana Airlines is set to halt its Incheon-Frankfurt route from April 1 to 16, while Korean Air has halted the same route until April 24. German airline Lufthansa also ceased offering flights.

A group of Korean nationals in Spain are also seeking to arrange a charter flight as the country has seen a spike in cases, with 42,058 infections and 2,991 deaths.

Meanwhile, Korea has arranged a charter flight to bring back some 200 Koreans stranded in Peru after the country sealed its borders and halted flights. The flight is expected to arrive in Seoul on Saturday.

For now, Seoul is not considering airlift missions to countries other than Peru and Italy. Despite growing calls from overseas Koreans for additional rescue missions, the government reiterated that charter flights can only be considered under certain conditions.

“The decision is based on how dangerous the place is, the (foreign) government’s (response), whether there is transportation to Korea and whether there is a sufficient number of people,” a senior Foreign Ministry official said on condition of anonymity.

Since the outbreak of the virus, the government has airlifted people from the Chinese city of Wuhan, the epicenter of the virus, as well as from Iran and the virus-stricken Diamond Princess cruise ship off the coast of Japan.