The Seoul Philharmonic Orchestra kicked off a new beginning over the weekend with Mahler’s symphony “Resurrection,” under the baton of new music director Osmo Vanska.

Vanska, 67, was appointed as SPO music director last May. On Friday and Saturday, the Finnish conductor held his inaugural concerts at the Lotte Concert Hall in eastern Seoul, presenting Mahler’s Symphony No. 2 in C minor “Resurrection.” 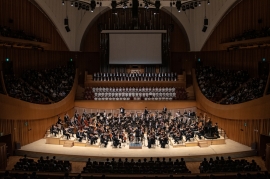 The Seoul Philharmonic Orchestra performs Mahler’s Symphony No. 2 in C minor “Resurrection,” under the baton of music director Osmo Vanska on Saturday at the Lotte Concert Hall in Jamsil, eastern Seoul. (SPO) 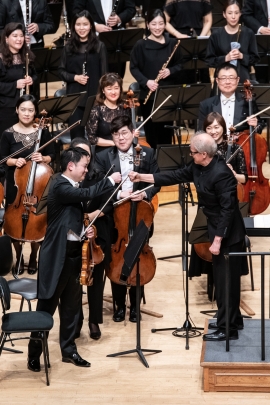 From the very start, the maestro was bold. Instead of a formal handshake -- the conventional means of greeting for an orchestra onstage -- Vanska gave a fist bump to Associate Concertmaster Wayne Lin. The gesture seemed to hint at Vanska’s personality, a conductor often hailed for his “gentle leadership” at orchestras.

The 80-minute grand masterpiece written by Mahler in the late 1800s, is a large-scale piece requires two harps, an organ, soprano solo, alto solo and a mixed chorus on top of all the usual orchestral instruments.

In the first movement, Mahler questions whether there is life after death. Resembling a funeral march, the movement is dramatic and solemn. There is a sudden shift in the mood with the second movement waxing nostalgic, taking a look at the pleasant life of a “hero.”

The third movement, inspired by the composer’s setting of “St. Anthony of Padua’s Sermon to the Fish” is designed to be disorderly, stressing the frivolousness of life. The fourth movement depicts the presence of the “primal light.”

The fifth movement is the highlight of the piece, rallying the full force of all instruments onstage. The sounds explode all at once like a giant waterfall. The sound of the horns coming from the chorus seats is impressive, creating a religious atmosphere. The chorus repeats “Aufersteh’n, ja aufersteh’n,” meaning “Rise again, yes, rise again,” in German.

On Saturday, Vanska wrapped up the evening without an encore, but again, giving a fist bump to orchestra members standing near him. The members flashed shy smiles.

The program choice was interesting, as Mahler’s Symphony No. 2 is often thought to be inspired by Beethoven’s Symphony No. 9 in D minor “Choral.” The SPO’s previous music director, Chung Myung-whun, put down his baton with Beethoven’s “Choral” on Dec. 30, 2015 at the Seoul Arts Center.

One of the most immediate tasks for Vanska at the SPO is member auditions. The orchestra has been putting off auditions for four years. According to a report by the SPO in November, there are currently 15 vacant spots -- including the concertmaster position -- with the 100-member orchestra.

Vanska has five more concerts for this year with the SPO, two in May and one each in August, November and December. He is to visit Korea again in June with the Minnesota Orchestra, with which he has been music director and chief conductor for the past 16 years.