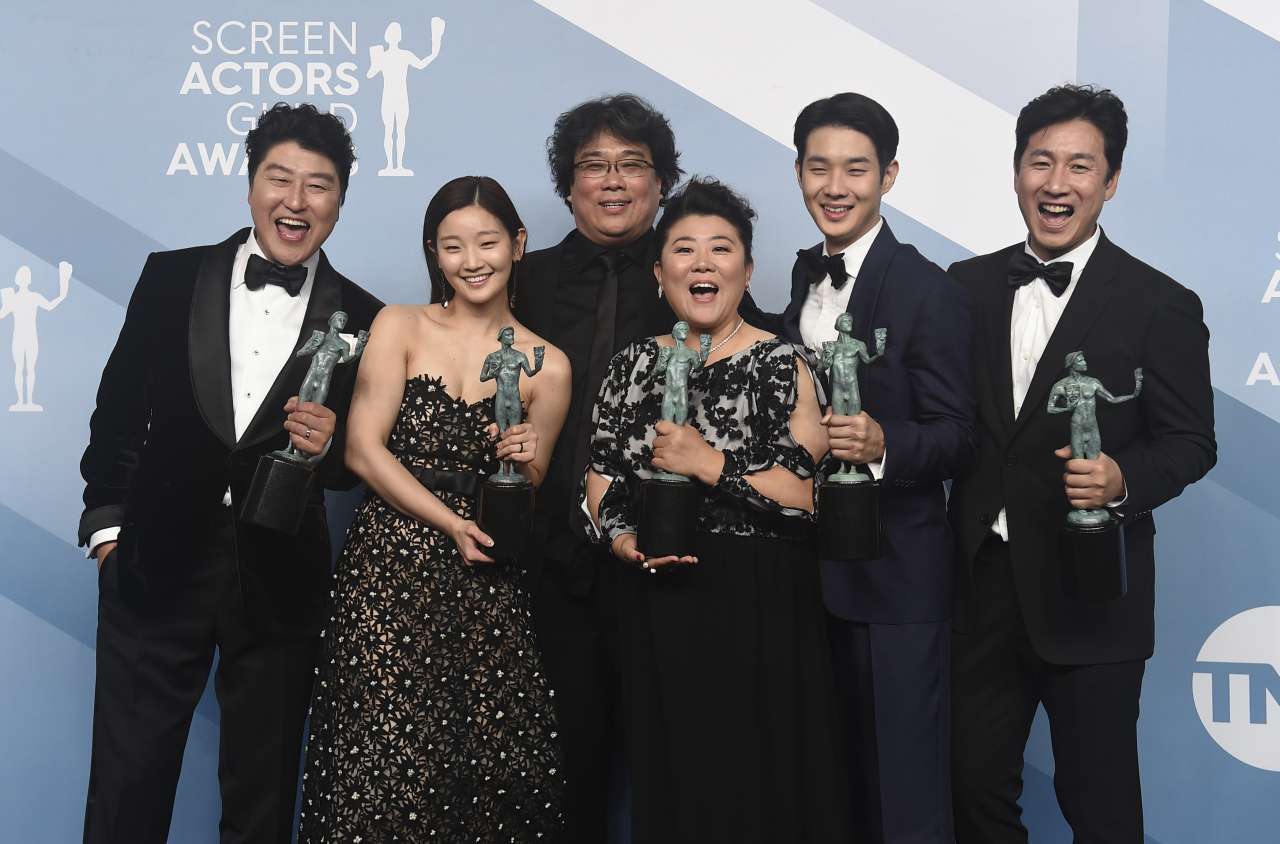 (AP-Yonhap)
Bong Joon-ho's sensational black comedy "Parasite," nominated in six categories, including best picture, at the upcoming Oscars, has been invited to 57 film festivals and award events across the world, and collected 55 trophies, its production company CJ ENM said Friday.

In May last year, the film about class division through two extreme families embraced the highest prize of Palme d'Or at the Cannes Film Festival, becoming a massive hit in 2019 and starting its awards-winning streak.

A month later, it won the top prize at the 2019 Sydney Film Festival, while actor Song Kang-ho, who played the father of a down-and-out family in the film, received the Excellence Award at this year's Locarno International Film Festival in Switzerland in August.

Since it was released stateside in October, "Parasite" has received rave reviews and critical acclaim from film critics in the United States.

Entering the US awards season in the runup to the Oscars, it nearly swept top prizes like best picture, best screenplay and foreign language film given by local critics associations, including those in Los Angeles, Chicago, Toronto and San Diego.

In 2020, "Parasite" continued its bullish rally. It took best foreign language film at the Golden Globes, marking the first South Korean film to win an award at the event arranged by the Hollywood Foreign Press Association.

At the Screen Actors Guild Awards, the film became the first non-English language movie to win the top honor of outstanding performance by a cast in a motion picture, following two titles at the Critics Choice Awards.

Director Bong received the best original screenplay award at both the Writers Guild of America Awards and the British Academy of Film and Television Arts (BAFTA) Awards.

As "Parasite" has raked in a series of major titles in key awards considered strong indicators of the Academy Awards slated for Sunday, the best picture category is regarded as a battle between "Parasite" and "1917," the World War I movie by Sam Mendes.

CJ ENM said its US campaign led by director Bong has successfully gone through the awards season and made a buzz since October.

The 92nd Academy Awards, given annually by the Academy of Motion Picture Arts and Sciences (AMPAS), will take place at the Dolby Theatre in Los Angeles on Sunday (US time). (Yonhap)