One out of 10 parents aged 24 or younger has had to bring up a child without a permanent home at least at one point since becoming a parent, due to financial difficulties, according to a report released Tuesday on housing insecurity faced by young parents.

According to a survey conducted by the Korean Unwed Mothers Support Network involving 315 young parents, both single mothers and single fathers, 12 percent of the respondents had raised their children in places such as motels and public saunas. 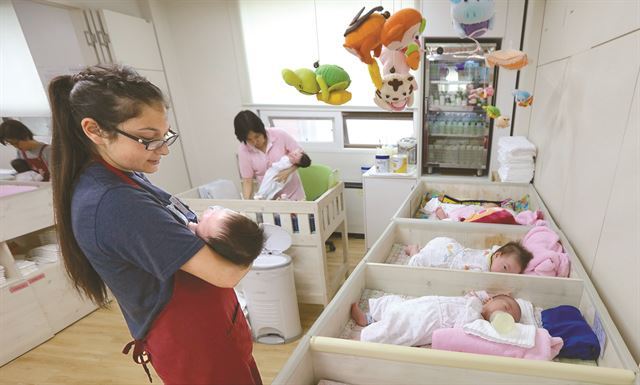 (Yonhap)
Some 18 percent were currently living in studio apartments or gositel -- tiny, low-cost one-room units in shared houses -- and 6 percent were temporarily living in public saunas or motels with their babies, the poll showed.

Most of them had no stable income, with 61.1 percent being out of work. Some 16 percent were working part-time and 6.3 percent were students.

Their major sources of income were government welfare benefits for low-income earners and a monthly allowance given only to single-parent families -- 250,000 won per child and 100,000 won for a parent. The combined amount fell far short of the minimum living expenses for a two-member family in South Korea, which stands at 1.74 million won.

Young parents face difficulties in terms of living, education, income and child-rearing, but at the center of these problems is “unstable housing,” the report said, noting “the social, structural and institutional limits” that hinder young parents from standing on their own two feet.