Govt. to strengthen crackdown on irregularities in private education

The education ministry said Friday it will conduct a special crackdown on alleged irregularities in the private education sector, including high-priced consulting services tailored for college admission.

The move is part of the government's pre-emptive measures to tackle potential rises in expensive private tutoring services as the government has announced a change in the policy related to college admission. 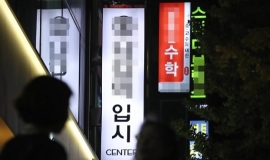 The Ministry of Education announced a set of measures to combat high-priced private education services after President Moon Jae-in hosted an anti-corruption meeting to discuss ways to promote fairness in society earlier in the day.

The government said it will cooperate with the state police agency and the tax watchdog to crack down on alleged illegal acts by cram schools.

In particular, it will focus on institutes providing expensive education consulting services for college admission.

The government will inspect 258 private education institutes nationwide. The threshold for judging high-priced tutoring is set at more than 1 million won ($864.68) per month.

Police are investigating private cram schools in the posh southern Gangnam of Seoul or professional coordinators for college entrance over allegations that they wrote self-introduction letters or did school work for students in return for money.

Authorities are considering the adoption of a "one-strike" policy that calls for nullifying the license of cram schools when they are found to conduct grave irregularities even once.