Starter Yang Hyeon-jong struck out 10 in six dominant innings of one-hit ball, and the bottom third of the South Korean lineup drove in three runs in South Korea's opening game at the Premier12 at Gocheok Sky Dome in Seoul. 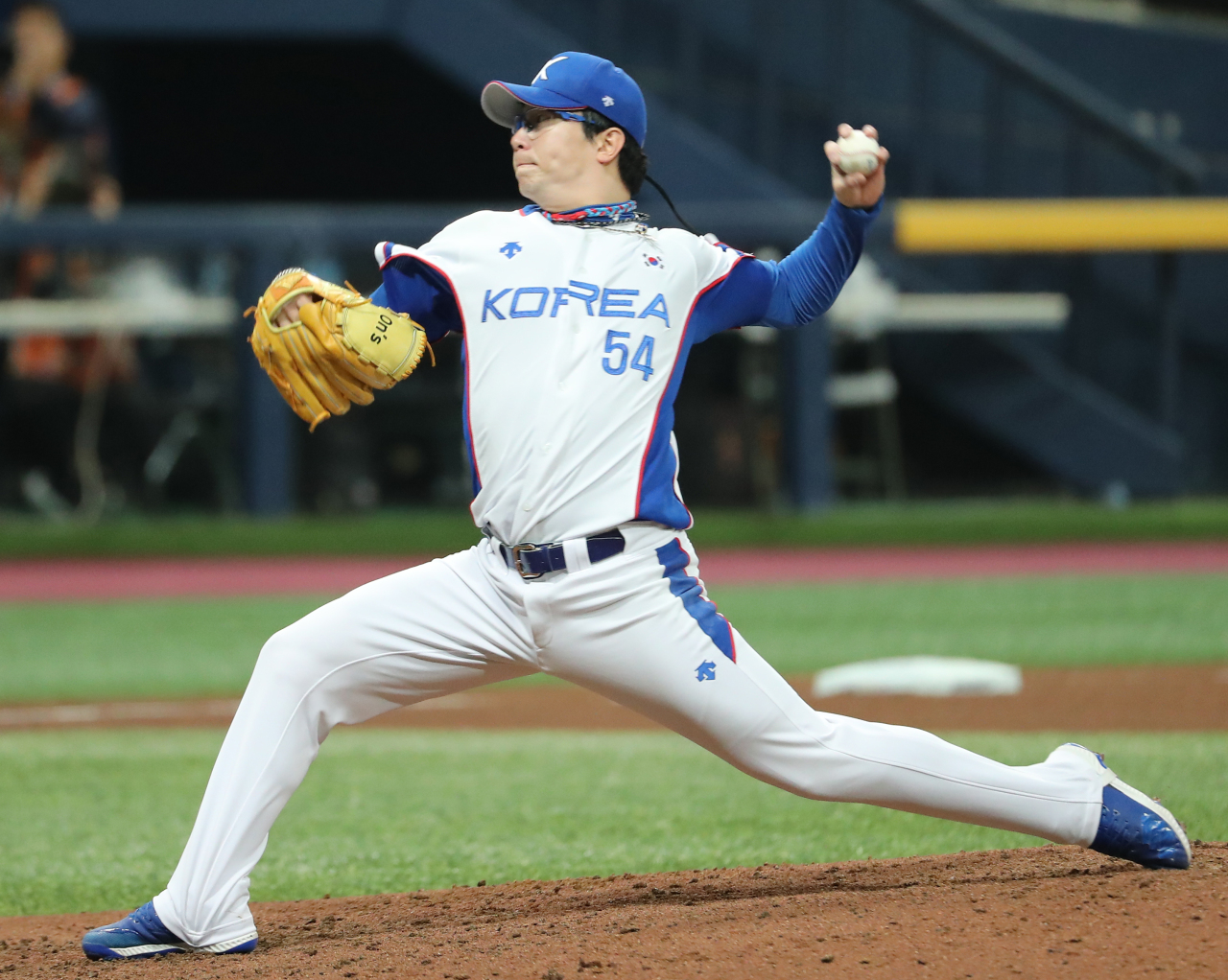 Yang Hyeon-jong (Yonhap)
The Premier12 is also the qualifying tournament for the 2020 Tokyo Olympics for the Americas and Asia/Oceania regions. There are 12 teams in this tournament divided into three groups. The top two nations from each group will advance to the Super Round, which starts next week in Japan.

To qualify for Tokyo 2020, South Korea must reach the Super Round and also finish ahead of its two Asia/Oceania rivals, Australia and Chinese Taipei.

South Korea is the last Olympic baseball champion from 2008.

The sport wasn't contested at the 2012 and 2016 Olympics but will make its way back next year. 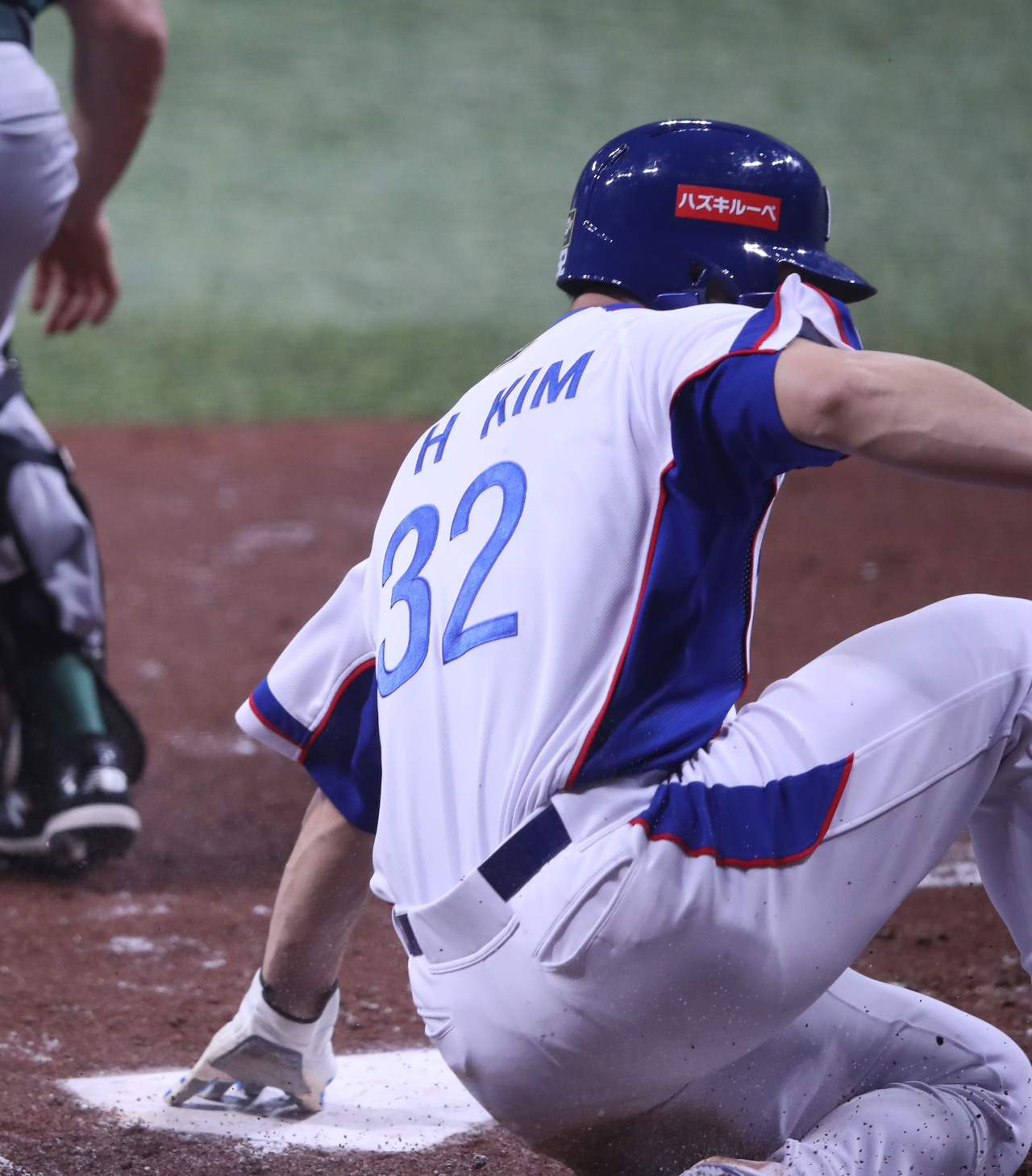 Kim Jae-hwan (Yonhap)
South Korea put up its first two runs on the board in the bottom second. Kim Jae-hwan drew a leadoff walk against starter Tim Atherton. And after a groundout moved Kim to second, Kim Hyun-soo, the national team captain, drove him home with a single up the middle.

On the very next pitch, No. 8 hitter Min Byung-hun hit a towering double off the top of the fence in left, and Kim slid home to make it 2-0 South Korea.

Yang, the South Korean starter, cruised through the Australian lineup early on, retiring the first 10 batters he faced while recording five strikeouts. 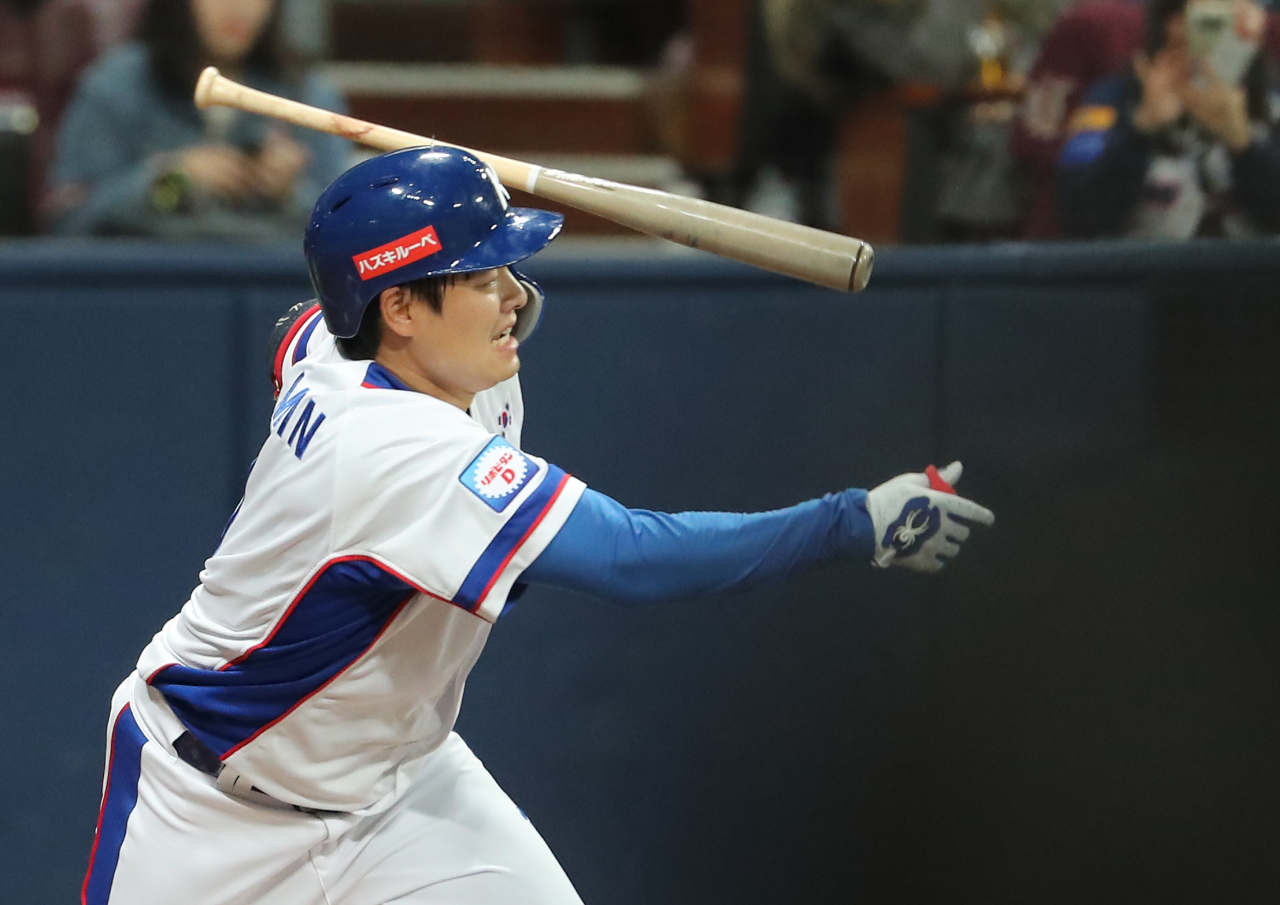 Min Byung-hun (Yonhap)
Atherton was gone after two innings. Left-hander Steven Kent took the mound to begin the third, and he promptly served up a third run for South Korea

Kent walked Kim Ha-seong to begin his day, and Lee Jung-hoo lined his second double of the game down the right field line.

Kim tried to pull up at third but alertly sprinted home to put South Korea up 3-0 when second baseman Robert Glendinning bobbled the relay throw from right fielder Tim Kennelly.

South Korea pulled further ahead in the sixth. With men at first and second, Hur Kyoung-min -- inserted into the starting lineup at third base in place of injured veteran Choi Jeong -- singled home a run for a 4-0 lead. 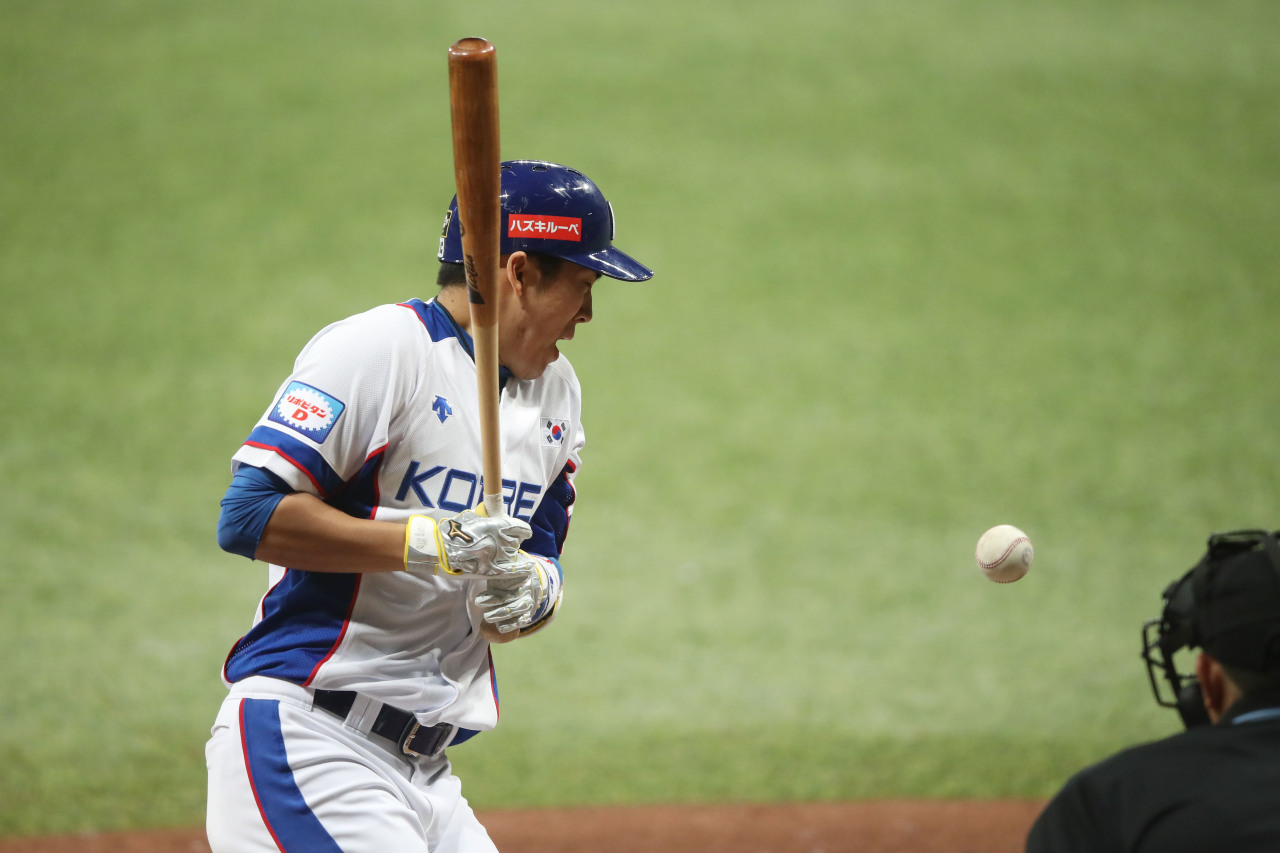 Hur Kyoung-min (Yonhap)
South Korea tacked on a run in the bottom eighth without the benefit of a hit. With two outs, reliever Samuel Street hit two straight batters and then walked the next two to let in a run for a 5-0 South Korean advantage.

Yang pitched around a single -- the only hit he allowed in the game -- and a wild pitch in the fourth, and sat down his final eight batters in a row before handing the reins over to the bullpen.

South Korea will next face Canada at 7 p.m. Thursday.

South Korea will start left-hander Kim Kwang-hyun against Canada. Kim ranked third in the KBO this season with a 2.51 ERA and tied for second with 17 wins. 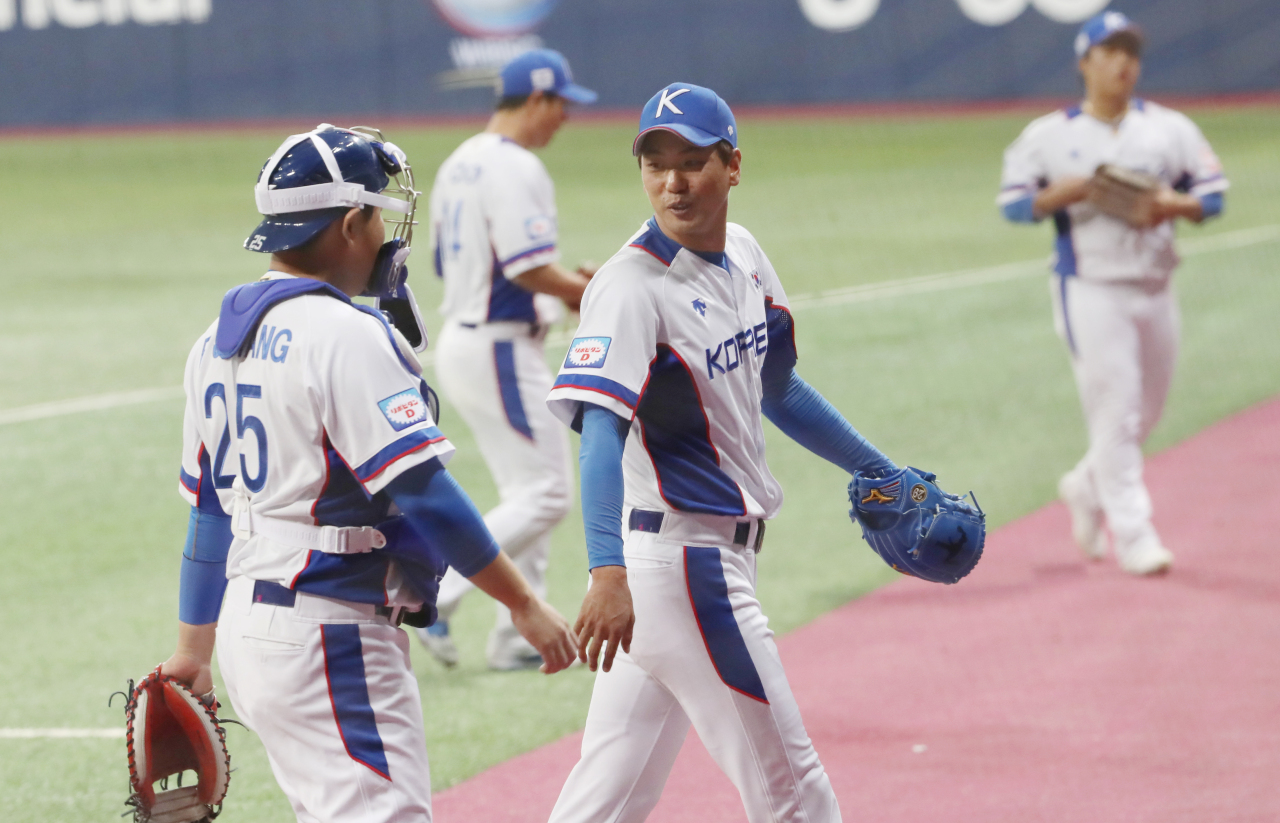 This was South Korea's first win to open an international tournament in five years, dating back to the 2014 Asian Games.

South Korea had notably dropped openers at the 2017 World Baseball Classic and the 2018 Asian Games. (Yonhap)