This year’s forum was held at The Shilla Seoul under the theme “Korea in crisis: How to survive in an era of trade wars and industrial risks.” It took place amid slowing global economic growth and mounting uncertainties, including US-China trade tension and Japan’s export curbs against Korea. 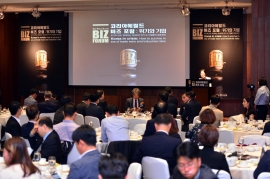 
Over 200 government officials, business representatives and leaders of foreign and domestic business associations attended the event to share insights on corporate risks and explore ways to manage them effectively.

Richard Levick, CEO of the Washington-based crisis management firm LEVICK, gave a presentation on how the Korean economy should react in the fast-changing business environment.

Kim Hoh, founder of THE LAB h, offered insights on how companies should communicate with the public in times of crisis, based on brain science analysis.

Lim Sung-taek, a managing partner at law firm Jipyong, used case studies to illustrate how an approach that focuses only on the law may not be sufficient in risk management.

“After years of relying on international factors for growth, Korean companies are now facing unprecedented risks, with the US-China trade war and the impact of Japan’s export restrictions upon our economy,” FTC chief Joh said in a congratulatory speech. 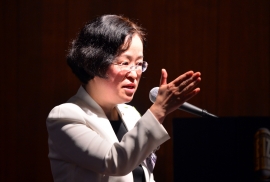 
“(But) the Korean economy has always managed to make a new leap forward in the face of crisis, thanks to the contribution of the business circle.”

The newly inaugurated chief underlined a fair economic order -- the key slogan of the antitrust body -- as a long-term road map for overcoming crises.

“In order to revitalize the business circle and to promote innovation, the core task is to establish a fair market order in which all may compete equally,” Joh said.

“Only then may (companies) find new opportunities in this age of uncertainty and SMEs find a momentum for growth.”

“But that would not be the only price to be paid. By breaching fair trade rules, (companies) would face more difficulties when addressing foreign investors.”

KOTRA CEO Kwon pointed out the challenges weighing on Korea’s economy and called for the diversification of the nation’s export market.

“The global economic paradigm is going through drastic changes. Key economies have turned to trade protectionism and unilateralism, putting free trade order and multilateralism at risk,” he said.


For Asia’s fourth-largest economy and its market players, the biggest hurdle is the unequal distribution of trading partners and export products, according to Kwon.

As of last year, the United States and China accounted for 39.6 percent of Korea’s export volume, while intermediary goods made up 64.1 percent. Furthermore, Korea’s monthly export volume has remained in a downtrend for 10 months straight since December last year, according to data.

“Such a biased trading structure will act to our disadvantage, especially given the growing level of uncertainties,” said Kwon.

“It is true that much (of the uncertainty) is attributable to external factors, but we may not just sit back and blame our given conditions. We have to face the problem at hand, analyze it and seek structural solutions.”

“In a fast-changing macro-environment, in an international trade scene mastered by unilateralism, in a slowing world economy, it is more important than ever for the government to create and maintain a business environment which gives space to creativity,” said Psillakis in his keynote speech.

“Doing business in Korea is also profitable, but there are several cases where rules and regulations change too quickly, without adequate input and dialogue with stakeholders.”

Leading the first session of the forum, THE LAB h founder Kim explained the social science of making public apologies, from the perspective of brain science.

“Our brain-scan study showed that a public apology which blames external, therefore uncontrollable factors tends to trigger the feeling of uncertainty and threat inside the observer’s brain,” said Kim.

The expert advised companies not to rely excessively on legal actions, as such an approach may only worsen public sentiment toward an issue.

US consultant Levick addressed the changing nature of crises, citing the examples of top-tier global companies that failed to respond appropriately to unexpected crises.

“The first question that we need to ask is ‘what is the crisis here?’ as we sit here in this disruptive age,” he said.

“Crisis is when shareholders or citizens think it exists. That’s when we have a crisis.”

As the final speaker, Jipyong chief Lim presented the dilemmas of dealing with crisis.

“Crisis always leads to liability in some way or another, and liability usually is associated with legal liability. But in fact, the concept of liability includes civil, criminal, and social liability,” said Lim.

While lawyers may advise their clients to take a legal approach, Lim suggested that those managing crises take a broader view and consider the socio-economic context before making decisions.