Samsung Display on Thursday announced it will invest a total of 13.1 trillion won ($10.9 billion) in establishing the world’s first production line for quantum dot-based display panels over the next five years.

The investment plan that has been highly anticipated by industry watchers makes it official that Samsung will switch from the current liquid crystal display-focused display technology to self-emissive quantum dot technology for large-size displays.

President Moon Jae-in added weight to the Samsung investment by attending a ceremony for an agreement between the panel maker and contractors to stabilize supplies of display materials, parts and equipment.

“Displays are our ‘dream platform’ that connect us from home to office, and are used at anywhere for industries, education and medicine,” Lee said. “We will invest over 13 trillion won only for next-generation displays and make new jobs for young people despite the difficult economic situation.” 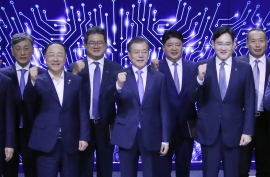 Samsung is planning to turn its current LCD line in Asan, South Chungcheong Province, into a Gen. 8.5 QD line phase-by-phase with a schedule to complete the conversion by 2025.

Starting next year, the new line will start manufacturing at least 30,000 units of large-size QD display panels over 65 inches.

Although the company did not specify that it is converting from LCD to OLED for large-size panels, it is reportedly developing panels that adopt blue OLED emitters and QD particles, referred to as “QD-OLED.”

If QD-OLED panels are commercialized, Samsung Electronics is likely to adopt the self-emissive panels for TVs.

The current LCD business workforce will be relocated to the new QD business and hire new employees specialized in quantum dot materials and process technology.

Samsung forecasts about 81,000 new jobs would be created in the QD display sector.

During the ceremony, President Moon also unveiled the government’s plan to support the OLED technology by allocating 400 billion won from its budget over the next seven years.

It is the third time for the president to visit Samsung’s facilities, including the smartphone plant in Noida, India in July 2018 and the semiconductors campus in April.

The president’s latest visit is interpreted as the government’s determination to spread Samsung’s investment initiative to other conglomerates and induce them to make investments amid the dire economic forecasts.

Moon also highlighted that the agreement between Samsung and other suppliers will offer a critical chance for the country to lessen its reliance on a particular country on imports of key display materials, parts and equipment.