Dutch designer Daan Roosegaarde believes that it may be possible to turn space waste into light in the near future.

The artist leads projects that use technology to raise awareness on environmental issues while maintaining esthetics. Based in Rotterdam, the Netherlands, the artist is the leader of Studio Roosegaarde, a social design lab comprising 20 engineers, designers and artists.

Taking the podium at the Herald Design Forum 2019 on Thursday at Grand Hyatt Seoul, Roosegaarde delivered a lecture titled “Landscapes of the Future.”

The artist named creativity, critical thinking and complex problem-solving skills as the most important skills for the future. 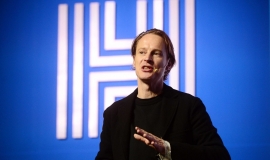 “These are all the things computers and robots are quite bad at,” he said. “It is not just money or computer chips. The notion of willingness to share is why we are here today.”

Roosegaarde’s latest ongoing project is with Space Waste Lab, a collaboration between his studio and the European Space Agency. The lab aims to find viable solutions for space junk.

“Space junks are currently floating around our precious Earth. They are tiny particles but because of the speed, they could hit satellites and create explosions. The particles are a threat to our data,” he said.

The lab received ideas from the public. From the 2,000 submitted ideas, the most intriguing and viable idea that appealed to him involved turning the waste into light. When the particles enter the atmosphere, they burn and create light.

“Waste is light. Can we use it to create shooting stars? For fireworks? You can clean up the universe and you have a new way of fireworks.”

Another project introduced at the forum was Waterlicht (Waterlight), in which he used blue light to create site-specific artwork at Museumplein in Amsterdam. It showed how the water level would rise and flood the below-sea-level city.

“More than 60,000 people showed up (on one night). Some looked scared, but most were inspired,” he said.

Roosegaarde also talked about the 7-meter-tall air purifier -- called Smog Free Tower -- that he and his team set up in Beijing, which went viral in Korea, too. More towers are installed in the Netherlands and Poland, and one will be showcased here at the Anyang Public Art Project from Oct. 17 to Dec. 15.

“I became inspired by the Beijing smog,” the artist said. “I have been working and living in China for many years.”

“We became part of the war on smog. The towers never solve the whole problem of the city. Of course, we need to invest in electric cars and bicycles,” he said. “But we are creating a place where you can share, feel the difference. That is where people can show more concern for clean air.”

Roosegaarde went on to speak about his environment friendly projects such as the Van Gogh Path, Gates of Light and Windvogel.

“You may look at all these things and think, ‘It’s all beautiful, but it sounds like a utopia,’” he said. “I don’t believe in utopia, I believe in prototypes. We don’t know what the future will look like. We cannot go back. If we don’t invest in new ideas, we will die. Step by step, we are improving.”