SEJONG -- The number of South Koreans, who have been “de facto” out of work, has surpassed the 3 million mark.

The extended unemployment figures, as specified by Statistics Korea’s Employment Supplementary Index III, includes “underemployed” workers, such as temporary employees who work fewer than 36 hours a week and want full-time employment, as well as seasonal workers who are out of work for part of the year.

The standard unemployment rate stayed at 3 percent, with the number of jobless at 858,000, in August. But under the extended basis, the number of de facto unemployed people came to 3.1 million -- or 11 percent of the nation’s 28.21 million economically active people. 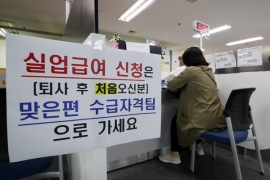 A notice board at a regional office of the Employment and Welfare Plus Center in Seoul informs visitors of the procedures to apply for an unemployment allowance earlier this year. (Yonhap)

The weak job market has led the government to pay out ever-higher amounts in benefits for those who lost their jobs, under the employment insurance system.

The growing volume of payouts reflects the extended jobless rate, a measure that also takes underemployment into account.

According to the Korea Employment Information Service, the government’s monthly payment of unemployment benefits reached 724.6 billion won ($605.5 million) in August. This is the highest figure for August since the government began to compile the data in 1997.

And the payment of unemployment benefits has nearly doubled in the last four years. The payouts surged by 97.7 percent, compared to August 2015, when it stayed at 366.4 billion won.

Women outnumbered men among benefit claimants in the month, accounting for 50.6 percent of the total. 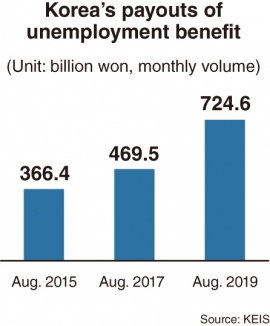 The monthly payment of unemployment allowances surpassed the 500 billion-won mark for the first time in March 2018.

The recent surge in benefit payments is attributable to increases in the statutory minimum wage, which shot up 29 percent in only two years (2018 and 2019), some government officials claimed. The Labor Standards Act stipulates that unemployment allowance payments should not fall below 90 percent of the minimum wage. (As of this month, that figure will be amended to 80 percent.)

While the average recipient was paid 1.18 million won per month in 2017, the average monthly payment surged to 1.51 million won in 2019, according to a release from the Ministry of Employment and Labor.

Given 2.4 trillion won in 2008, the nation’s unemployment-benefit payment shot up 166.6 percent in a decade. And the yearly figure for 2019 is projected to exceed 8 trillion won if it maintains its current pace.

During the January-August period this year, the monthly payouts came to 691.6 billion won on average and 5.53 trillion won collectively. This suggests that the yearly sum could approach 8.3 trillion won by the end of the year.