Korea, Japan to discuss export controls at WTO on Friday

South Korea and Japan are slated to have bilateral consultations in Geneva on Friday, a first step toward resolving a trade dispute triggered by Japan’s export restrictions, officials said Thursday.

Since Sept. 20, when Tokyo responded to Seoul’s request for bilateral consultations in accordance with the World Trade Organization’s rules, the two countries have discussed details such as dates and times through diplomatic channels and decided to send director-level representatives to Geneva to hold consultations, according to the Trade Ministry.

Chung Hae-kwan, the director general in charge of legal affairs for the Trade Ministry, left for Geneva on Thursday morning to take part in the consultations. 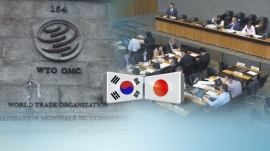 Three months ago, Japan tightened restrictions on exports to Korea of three high-tech materials: fluorinated polyimides, photoresists and hydrogen fluoride. Previously, Korea’s Supreme Court decided to hold Japanese companies liable for having taken advantage of forced labor during World War II, and the changes to its export control system are widely seen as a form of retaliation.

A Trade Ministry spokesperson said the Korean government will do its best to resolve the matter as soon as possible.

It usually takes about 15 months for a WTO panel to make a decision, beginning from the start of bilateral consultations.

But if either side were to challenge the panel’s decision, the appeals process could take two to three years.

As bilateral relations between Korea and Japan have sunk to their lowest level in recent months since the normalization of diplomatic ties in 1965, bilateral trade volume has also declined.

According to the government data, exports from Korea to Japan dropped 3.5 percent from July to August. Exports from Japan to Korea fell 8.1 percent during the same period.

In the past three months, the Japanese government has not approved a single hydrogen fluoride shipment to Korea, according to the statement released by the Trade Ministry last week. Instead, the Japanese authorities are demanding additional documents.

“Liquid hydrogen fluoride exports for semiconductors now require as many as nine documents, similar to countries subject to a United Nations arms embargo,” the statement said.