Online consumers outside of South Korea are mostly interested in buying Korean brand beauty products like cosmetics and perfumes, a survey from the Korea International Trade Association showed Wednesday. 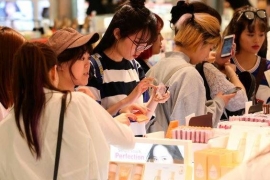 The survey of 460 consumers in the US, China and Europe conducted by online shopping platform Kmall24 showed that 26 percent of them picked K-beauty as the most desired shopping category. Following that were K-pop-related products such as music albums and DVDs at 24 percent and food and beverages at 16 percent.

Most respondents were women in their 20s and 30s, KITA said.

Among these consumers, 62 percent first encountered Korean products through cultural content such as Korean TV dramas and music videos, the survey showed.

Compared to brands from their own countries, respondents cited better quality (32 percent) and reputation (23 percent) as the key selling points for the Korean brands.

In the evaluation category marking points out of five, design and quality received an average of 4.41 points and 4.35 points, respectively, KITA said.

After-service and delivery, however, marked lower at 3.9 and 3.83 points, respectively.

To discover brands and products, 56 percent said they searched through posts on various social media outlets, followed by 21 percent citing YouTube and other video sites and 9 percent citing comments posted by buyers on online retail sites. This means shoppers are more sensitive to evaluations of other consumers rather than direct promotions from the companies, KITA noted.