Number of 50s-and-above up 47% in the last decade, while population growth stays at 4.3%

SEJONG -- It is widely known to the public that South Korea’s senior population is rapidly growing, as the government and media outlets have continued to raise awareness about the aged society and demographic changes.

The percentage of Koreans aged 70 or over has surpassed 10 percent. Further, the percentage of those aged 65 or over -- who are classified as seniors -- has exceeded 15 percent.

The situation of fast-aging is getting more critical, given the current figure for the population of those aged 50 or over, many of whom are about to retire or become senior citizens in about a decade.

According to the Ministry of Interior and Safety, the number of Koreans aged 50 and above exceeded 20 million this year for the first time in history. 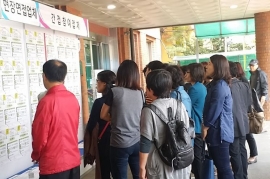 Job seekers look at a bulletin board on which companies post recruitment notices for the middle-aged and elderly in Guri, Gyeonggi Province. (Gyeonggi Provincial Office)

The seriousness lies in their proportion as they took up 39.1 percent of the nation’s population, 51.8 million, as of last month. This indicates that 2 in 5 Koreans are aged 50 or more.

A decade ago in September 2009, they accounted for 27.6 percent of the population. 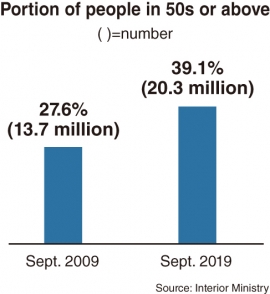 These figures indicate that the population of 50s-and-above surged 47.8 percent over the past 10 years, while the growth of total population inched up 4.3 percent.

The average ages for men and women were 41.3 and 43.6, respectively, across the country.

Local think tanks warn that the social burden of caring for elderly people through taxes and other resources, will worsen in the coming years and decades.

The Korea Economic Research Institute, in its report, said the nation was projected to see its “gross domestic product drop by 0.97 percent every time the proportion of elderly people to the total population increases by 1 percentage point.”