Four South Korean investigators left for the United States on Thursday for a joint probe with U.S. officials into the capsizing of a cargo ship off the U.S. east coast, Seoul's oceans ministry said Thursday. 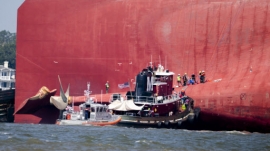 The investigators will team up with officials from the U.S.Coast Guard and the National Transportation Safety Board to try to find the exact cause of the mishap near the Port of Brunswick, Georgia, the ministry said.

The 71,000-ton the Golden Ray carrying about 4,000 cars capsized off the Georgia coast on Sunday.

The U.S. Coast Guard rescued 19 of the 23 crew members soon after the accident and it brought out four South Korean crew members trapped inside the vessel about 41 hours later.

"The probe is meant to find the exact cause of the accident and make sure a similar accident does not recur," Kim Byeong-gon, the chief South Korean official handling marine casualty investigations, said ahead of their departure.

Kim said it remains unclear when he can finish the joint probe and return home. (Yonhap)