GS Engineering & Construction, a major builder in South Korea, said Tuesday it has secured a 275.5 billion-won ($231 million) order for a petrochemical plant construction project in Thailand.

Under the deal with Thai firm HMC Polymers Co., GS E&C will build a polypropylene plant at a Map Ta Phut site in Rayong Province, Thailand. The company said it will take about 35 months to complete the polypropylene plant, which will have an annual capacity of 250,000 tons. 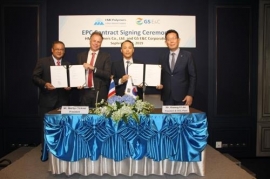 Officials from GS E&C and HMC Polymers Co. posing for a photo after signing a contract for the construction of a polypropylene plant in Thailand. (GS E&C)

GS E&C previously won a $185 million order from HMC Polymers in 2007 to build its polypropylene plant in the Southeast Asian country.

GS E&C is the No. 4 builder in South Korea in terms of building capacity. It logged 5.1 trillion won in sales and 398 billion won in operating profit in the first half. (Yonhap)