Delta Air Lines, Inc. said Tuesday it has increased its stake in Hanjin KAL, the parent company of Korean Air Lines Co., in what it called a long-term investment.

In a report to the main bourse operator Korea Exchange, Delta said its stake in Hanjin KAL rose to 9.21 percent from 5.13 percent. 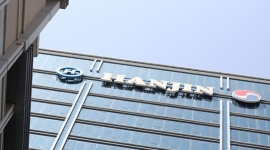 "The purpose of the investment is not aimed at affecting the management rights," the report said.

Last month, Delta jacked up its interest in Hanjin KAL to 5.13 percent from 4.3 percent and said it would eventually increase its share in the firm to 10 percent.

Delta and Korean Air formed a joint venture last year to collaborate on the industry's most robust trans-Pacific routes, providing customers access to more than 290 US destinations and over 80 in Asia.  (Yonhap)