South Korea has decided to build a separate library for President Moon Jae-in by 2022, when his tenure ends, a related ministry announced Tuesday.

A national library for the country's retired presidents is located in Sejong, an administrative town some 120 kilometers south of Seoul.

But the government plans to construct a separate repository for official papers, records and historical materials produced during Moon's presidency, according to the National Archive of Korea under the wing of the Ministry of the Interior and Safety. 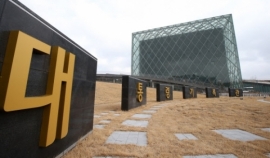 Under the 17.2 billion-won ($14.4 million) project, it aims to open a facility that is 3,000 square meters in Busan or Yangsan, to which Moon is expected to retire.

It has already earmarked 3.2 billion won in next year's budget for the purchase of land.

It's permitted to construct such an independent presidential library under the Presidential Records Act introduced in 2007. And Moon will become the first South Korean president to have one.

Ministry officials said the existing Sejong library is running out of space, adding 83.7 percent of storage room has been filled.

If a new one is built for Moon near his private home, he will have easier access to it as well, they said.

But the move to open his own library may cause a controversy over the possibility of the extra use of taxpayers' money for its operation and maintenance. Moon's five-year term finishes in May 2022. (Yonhap)