The name Korando, SsangYong Motor’s signature sport utility brand and the oldest such brand in Korea, has represented power, firmness and masculinity for the last 37 years. The all-new Korando that returned to the market early this year after an eight-year hiatus, however, flips the common image of the SUV on its head. It is stylish and sophisticated, yet affordable. 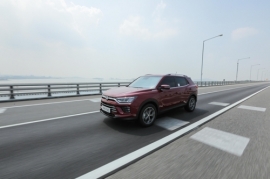 The Korando gasoline model, launched six months after the 2.0-liter diesel version, showed no major flaws throughout the media test-driving session between Seoul Marina and Paradise Hotel in Songdo last week. The only thing The Korea Herald found disturbing was the steering wheel, which was too soft for maneuvering. It could be a good feature for city drives but not ideal for the highway.

The first gasoline model under the Korando brand was launched in response to waning market demand for diesel-powered SUVs.

Korando gasoline offers a much smoother driving experience than expected -- even braking was smooth, not to mention the acceleration that had no trembles from the engine while speeding up to 150 kilometers per hour.

The secret behind the smooth, but dynamic driving is its turbo engine matched up with Aisin Aw’s third-generation six-speed automatic gearbox, the company said, claiming it creates a speedy yet smoother transmission.

The engine compartment is covered with a sound package as well as passenger space that minimizes the inflow of noise from outside and the engine. The 1.5-liter turbo gasoline model has seven air bags and other safety features, including lane keeping assist, driver awareness assist and autonomous emergency braking systems.

The Korean unit of Indian conglomerate Mahindra & Mahindra sought stability and a refined style by lowering the height of the vehicle and increasing its width. To visualize the condensed, yet sophisticated and dynamic power and energy in the vehicle, SsangYong kept the facade of Korando simple and modern by aligning a half-shine chrome intake grille and vertical light-emitting diode fog lamp.

The interior is simple but high-tech, with a 10.25-inch full digital cluster that displays a full navigation map, media player and safety warning sign all in high-definition graphics. It comes with audio, video and navigation systems all controlled through a 9-inch center fascia with voice recognition function. 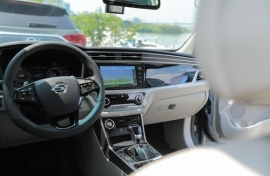 It is also certified as a super ultralow emissions vehicle, in a first for a domestically manufactured SUV. The certification is given to vehicles emitting less than 0.019 gram per kilometer of hydrocarbon and nitrogen oxide, with discounts on public parking and tolls offered.

What makes the Korando gasoline version even more attractive is its price. It ranges from 23 million won ($19,000) to 28 million won.