“The first draft was written in 2016, and we learned of the (Burning Sun) incident while we were editing the film,” said director Lee Sung-tae, on his upcoming crime movie. “I actually thought I should change that part (about doing drugs in clubs) after one of our young staff members told me that it was not possible, since most clubs don’t have rooms.”

What is even more ironic is that some of the scenes in the film were actually shot in the now-shut down Gangnam club, the name of which is forever associated with a scandal involving alleged drug abuse, sex crimes and police corruption that brought down several top celebrities including former Big Bang member Seungri. 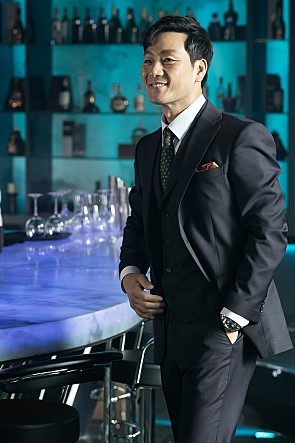 “By Quantum Physics: A Nightlife Venture,” which in Korean is just “Quantum Physics,” does not actually deal with science, but rather protagonist Lee Chang-woo (Park Hae-soo) who believes in what he calls the “quantum physical theory” that what you think of can shape reality.

A major player in Korean nightlife, Lee finds out about a drug party involving a top celebrity and alerts police officer Park Gi-heon (Kim Sang-ho) about it. But they soon learn that they have bitten off more than they can chew, with some in the prosecutors’ office and even politicians being involved.

Lee, his associate Seong Eun-yeong (Seo Ye-ji) and Park must fight those in power not only for justice, but also for their lives.

About his character, the leading man Park said Lee is known as “Hua Tuo of nightlife” -- after the legendary Chinese physician -- for constantly helping nearly bankrupt nightclubs get back on their feet.

“He is someone who has conquered the industry with only his words,” he said, saying that his “mouthy action” will be based on humor.

Director Lee explained that rather than just focus on the crime itself, the key part of the film will be about how the protagonist faces troubles and overcomes them. “(Park’s character) is someone I would like to introduce to the audience. I’m sure you will like him,” he said.

“The quantum physics that he speaks of is not pure science, but the philosophical belief that derives from how he interprets this concept. The film is about how his positive energy brings about changes.”

Seo’s character Seong will also play a key role in the film through her connections. “She is someone who demands attention, especially from men, with her charisma,” she said. “She is someone who is smart enough to pass the bar exam, who is a smooth talker. I think I (my character) is the hidden card in the story.”

“By Quantum Physics: A Nightlife Venture” opens in local theaters on Sept. 19.