A statue of a girl representing victims of Japan's World War II-era sexual slavery, which has been on display at an international arts festival in Aichi Prefecture, central Japan, was ordered by Japanese officials to be removed, the festival's organizers said Saturday.

The statue, which symbolizes Korean women who were forced to serve as sexual slaves for front-line Japanese soldiers during the war, was created by a South Korean artist and has been on display at the Aichi Triennale international contemporary art festival. 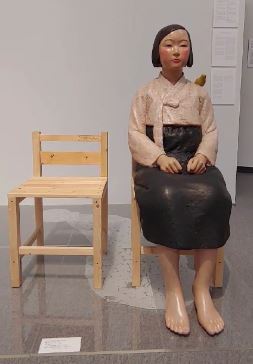 The sex slaves are one of the most emotional issues that still remain unresolved between South Korea and Japan.

According to historians, up to 200,000 women, mostly Koreans, were coerced into sexual servitude at front-line Japanese brothels during the war when the Korean Peninsula was a Japanese colony.

Kim Un-seong, the Korean artist who created the statue, condemned the Japanese politicians, saying they declared "non-freedom of expression."

In a telephone interview with Yonhap News Agency, Kim said the statue is aimed at facilitating discussions with Japanese citizens about a long-standing grievance regarding the Korean victims.

Japan, which tightened exports of key materials to South Korea on July 4 in apparent retaliation over compensation for wartime forced labor, decided to remove Seoul from a list of trusted export destinations on Friday.

On Saturday evening, Japanese organizers of the Aichi Triennale protested against the notification to remove the statue.

In a joint statement, the Japanese organizers denounced the notification as the "biggest post-war censorship" and a "historic violence."

The organizers said they are considering taking legal action against the notification. (Yonhap)