In a Realmeter survey of 506 respondents, 54.6 percent were in support of the boycott campaign.

On Thursday, “NoNo Japan,” an online community displaying consumer brands and products originating from Japan, was temporarily inaccessible due to heavy traffic. 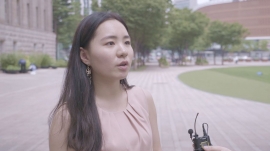 “I’m aware that many are boycotting Japanese products,” said Lee Min-youn, a 22-year-old college student. “In support of the movement, I’m also not using them. I even try to avoid going to Japanese restaurants when I go out to eat.”

Lee’s decision to boycott Japanese food could have a significant impact, considering the popularity of the cuisine here. According to data from the Fair Trade Commission, the number of Japanese restaurant brands increased from 89 in 2015 to 154 in 2017, marking an increase of 73 percent in two years.

Cho Yong-sik, 50, said he had stopped drinking Japanese beer in protest of Japan’s move, commenting, “I now think twice when it comes to things related to Japan.” 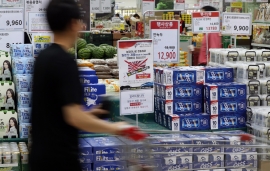 According to Cho, who had seen several boycotts against Japan in the past, the most recent campaign shows a different aspect.

“The past boycotts weren’t effective because the society at the time wasn’t as democratic as now,” Cho said. “But this time no one is forcing others to boycott. Everyone is acting voluntarily.”

Cho said that even his middle school daughter is taking part, consuming Korean sweets instead of Japanese, which she had enjoyed more.

However, not everyone is welcoming the boycott. Some did not support the protest against the neighboring country, or were even unaware of such a movement.

“The people don’t need to fight. They’re acting too hastily by holding a boycott now,” a man in his 70s, who wished to remain anonymous, said. “The two countries should find solutions diplomatically. The leaders must talk.”

A couple of college students in their 20s, who also did not wish to reveal their identities, said they had heard of such social activities but were not joining the boycott. “None of my school friends are boycotting or talking about the issue,” one said. 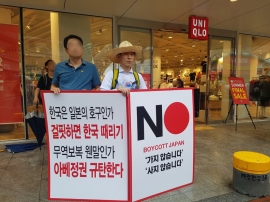 Nonetheless, the boycott campaign has started to show some effects in the last few days, especially on the tourism industry.

Both Hana Tour and Modu Tour, the nation’s two biggest travel agencies, said their reservation rates have dropped by more than 50 percent during the last three weeks compared to same period last year. Charter flights from Gimpo Airport in Seoul and Izumo Airport in Japan’s Shimane prefecture, provided by Korea Express Air, have been canceled from July 12 through July 25.


(Video shot and edited by Choi Ji-won/ The Korea Herald)

“Some people (who are against the boycott) say the government and the people should be seen separately. However, the anti-Korean protests (in Japan) are already widespread, and it’s not really easy to differentiate the people from the government,” she added.