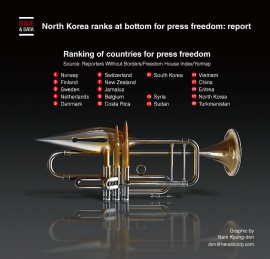 North Korea, along with China, Syria and other countries, has been rated as the worst in terms of press freedom, a recent report by a US freedom watchdog showed.

US-based Freedom House released the annual report for 2019, titled “Freedom and Media: A Downward Spiral,” in which the North got zero on a scale of zero to four points.

Dozens of other countries also received zero in the report.

Norway had the best score for press freedom, followed by Finland and Sweden. Eritrea, North Korea and Turkmenistan occupy the last three places of 180 countries in the ranking.