While the trade war between the United States and China is reshaping the global economy, it is also leaving little room for South and North Korea to move the denuclearization process forward, according to John Park, director of the Korea Project at the Harvard Kennedy School.

“If the US and China have a truce or suspend the application of tariffs, that could provide political space for South Korea’s diplomatic role to increase. But, in this environment, South Korea’s impact is quite limited,” Park told The Korea Herald on Tuesday. Park has been conducting research on North Korea for some 20 years, focusing on the regime’s accumulated learning in evading targeted sanctions. 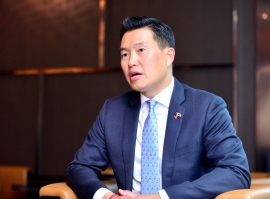 John Park, director of the Korea Project at the Harvard Kennedy School, speaks during an interview with The Korea Herald in Seoul, June 4. (Park Hyun-koo/ The Korea Herald)

Previously, effective negotiations with Pyongyang were carried out against a backdrop of close coordination between Washington and Beijing.

The absence of such coordination creates “some space for North Korea to maneuver or gain the attention it really requires,” Park said, as the Chinese leadership is distracted by the trade war with the US, which could affect the economic vitality of the country.

After South Korea hosted the 2018 PyeongChang Winter Olympics, during which athletes from South and North Korea marched under the Unification Flag and which led to an inter-Korean thaw, the South played a “very large and significant role,” Park said.

“The stars aligned in a way that South Korea’s leadership and different types of diplomatic roles that it was playing turned out to be very decisive and very effective, but right now the conditions don’t support that kind of outcome,” Park said.

“During this environment, it’s important to encourage direct communication between Washington and Pyongyang.”

Since the second summit between US President Donald Trump and North Korean leader Kim Jong-un ended without a new agreement in February in Hanoi, Vietnam, the pace of Pyongyang’s engagement with Washington and Seoul has significantly slowed amid struggles to find a middle ground.

“Hanoi is still a shadow that it is quite large in terms of how it affects the US and North Korea. But we had this leader-to-leader contact, the communication could resume,” he said.

The remaining months leading up to the end of the year are crucial to breaking the deadlock in the US-North Korea dialogue, given that the US is entering a presidential election cycle.

“Unfortunately, if we don’t see the movement, then there’s higher likelihood that the North Korean nuclear issue will be pushed to the side as the US focuses on domestic issues,” he said.

While a third meeting between Trump and Kim would be beneficial, Park believes it is time for more detailed work to be done with clear instructions to working-level officials, including defining what denuclearization means and how to achieve it.

“Even going into the Hanoi summit, it was not 100 percent clear what the understanding was by either side. Even specifically what North Korea denuclearization means with the scale, the type, the timeline of envision, who does what and when, where, how. Those are the details that still need to be worked out.”

For a US-North Korea working group to map out detailed plans, Park suggested opening a liaison office to facilitate meetings on regular basis.

Assessing the efficacy of sanctions against North Korea, Park argued that the North Korean regime had become smarter about evading sanctions by leveraging “North Korea, Inc.,” a network of state-owned trading companies that kept the flow of cash and supplies ready, as well as employing capable Chinese middlemen to facilitate the procurement activities.

“We really need to factor into our calculations that 1 percent of the North Korean regime who live in commercial hubs in China and Southeast Asia are able to procure their business and bring things back to the regime, either luxury items or components for the weapons of mass destruction programs,” he said.

Pointing out that North Korea’s ability to avoid or adapt to the sanctions should be taken into account when calculating the durability of the regime, Park said, “The situation could be much longer than we imagine.”

To examine how sanctions spark innovation in the North and how the regime evolves, Park plans to start research next month on North Korea’s cyberactivities, particularly cybertheft in South Korea, by meeting cybersecurity firms and individual cybercrime victims here.

Park was in Seoul from June 2-8 as part of the Korea Foundation’s “NextGen Leaders” program, which invites emerging and established policy leaders in the US to visit South Korea to deepen understanding of US-Korea policy issues in cooperation with the National Bureau of Asian Research.