As the auteur said, it was a “timely gift” to commemorate the centennial anniversary of Korean cinema, which has grown in leaps and bounds to become the fifth-largest player in the world film industry by the number of box office admissions, according to the UNESCO Institute for Statistics.

Although the box office was dominated by foreign films at certain times in the past, Korean films have stood their ground for nearly two decades and held a market share of 50.9 percent as of 2018. Considering recent success at international film festivals, many believe the Korean film market is going strong. 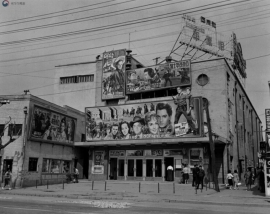 The exterior of Dansungsa, the nation’s first movie theater, in Seoul’s Jongno district in 1962. (National Archives of Korea)

There is a dispute about when exactly motion pictures landed on the peninsula. It was sometime around the turn of the 20th century, and may have been as early as 1897. But Korea’s first domestic film was “Uirijeok Gutu (Fight for Justice)” of 1919, which was actually part film and part theater piece. It played at the historic Dansungsa Theater, which had previously played only imported films since it opened in 1907.

The 1921 film “Chunghyang-Jeon” is believed to be Korea’s first feature film, but many consider the 1926 silent film “Arirang” -- written, directed and starred in by Na Woon-gyu -- one of the most important works of early Korean cinema. Encompassing the theme of national pride and resistance against Japan’s colonial rule, it was the first nationalistic film of the colonial era, a time when the colonizers were attempting to glorify their actions through the medium.

Numerous films have carried the torch of “Arirang” till this day, telling stories of the Koreans’ struggle to maintain their national identity and throw off Japan’s rule. The 2015 film “Assassination,” the 11th-highest grossing film ever here, is the story of fictional independence fighters who attempt to assassinate Japanese bigwigs in Gyeongseong, the former name of Seoul.

In 2007, Ahn Jong-hwa’s 1934 silent film “Crossroads of Youth” was discovered and restored, making it the oldest Korean film that still exists today. All the earlier films have been lost.

After the 1950-53 Korean War, South and North Korea parted ways, as did their film industries.

As South Korea rose from the ashes of the war, its film industry began to boom, seeing the number of films produced increase exponentially from 15 in 1954 to 111 the very next year.

The year 1962 saw masterpieces like Kim Ki-young’s provocative “The Housemaid” and Yu Hyun-mok’s “Obaltan,” which depicted the bare, cruel reality of the postwar struggles that the citizens had to go through.

The same year, military junta Park Chung-hee took power and so began a dark era in Korean political history. Under the dictatorship, which imposed strict censorship, a film could be banned if it could potentially infringe upon constitutional law or undermine the authority of the state, disrupt the social order, cause friction between Korea and other countries, or cause the people to “slack off.”

Because of this clampdown on social, political and ideological dissent, sexuality prevailed on the screen, giving rise to the so-called “hostess films” that featured sex workers as protagonists like “Yeong-ja’s Heydays.”

There are films like “March of the Fools,” directed by Ha Kil-jong, which includes heavy social commentary and is considered one of the best films of the era. Due to its depiction of society under Park’s regime, however, a huge chunk of the film was deleted when it was played in theaters.

The ensuing administration -- led by another military figure, Chun Doo-hwan -- was little different.

Foreign films and domestic movies with lewd content continued to dominate the box office, such as “Madame Aema,” which was the top-selling flick of 1982.

Yet the 1980s saw Im Kwon-taek, one of the most influential Korean directors of all time, stretch his wings. This prolific director made the film “The Surrogate Woman,” which was recognized locally and internationally -- with its lead, Kang Soo-yeon, winning the best actress award at the 1987 Venice Film Festival -- and his prominence persisted into the 1990s and 2000s.

After countrywide protests in 1987 led to the downfall of the Chun regime, directors were allowed to expand their range of subject matter. Iron-fisted administrations were not the only problem ailing the industry, however.

Screen quotas and the big turnaround

In 1987, the percentage of Korean films in theaters dipped below 40 percent for the first time. This was also the year when foreign film companies were allowed to distribute their products directly in the local market, beginning with Adrian Lyne’s “Fatal Attraction.”

The year 1993 marked one of the worst years ever for the Korean cinema. Korean films were played on only 15.9 percent of screens nationwide, the lowest number ever, falling short of the 20 percent mark for the second straight year. There were calls for measures to protect the local film industry.

Amid such calls, in 1996 the government reinforced a screen quota system that had been introduced in 1967, forcing local theaters to play domestic films for at least 146 days. This continued until 2006, when the required number of days was reduced to 73.

The 1990s also saw some quality Korean films. Im’s “Seopyeonje” in 1993 became the first film in history to top the 1 million admissions mark, and locally brewed fantasy, science fiction and blockbuster films begin to be made. This is also when actors like Song Kang-ho, Choi Min-sik and Sol Kyung-gu -- actors who still carry the Korean cinema today -- started making names for themselves.

In 1992, Kim Ui-seok’s “Marriage Story” was released by Samsung, becoming the first Korean film to be released by a business conglomerate. The involvement of conglomerates would go on to reshape the entire industry.

The year 1999 was an important one for Korean cinema. Not only did the Korean-to-foreign film ratio in theaters exceed the 30 percent mark for the first time since 1986 -- 39.7 percent -- but it was also when Kang Je-gyu introduced Korean fans to their first locally made big-budget blockbuster film, “Shiri.” Of course, “big budget” is relative as it is estimated to be under $9 million, but the film became the top-selling movie of the year.

What followed were the true golden years of Korean cinema.

Before Park Chan-wook splashed onto the international film scene with “Oldboy,” he made his mark with the 2000 film “Joint Security Area.” The movie about four South and North Korean soldiers had heart, comedy and tragedy and was the highest-grossing film of the time.

“Friend” by Kwak Kyung-taek was a smash hit the next year despite being restricted to viewers over 19, and small but well-made films like Im Soon-rye’s “Waikiki Brothers” gained loyal fans. “Waikiki Brothers” opened up the Jeonju International Film Festival in 2001, just a year after the inaugural festival kicked off with “Virgin Stripped Bare by Her Bachelors” by Hong Sang-soo, another master auteur who would soon be recognized on the world stage.

Many consider 2003 the best year for Korean cinema. That is when 2019 Palme D’or winner Bong released “Memories of Murder,” just a few months before Park Chan-wook’s “Oldboy” was released and went on to win the Grand Prix at the 2004 Cannes Film Festival.

Kim Ki-duk, who would win the Golden Lion with “Pieta” almost a decade later, released the masterfully directed “Spring, Summer, Fall, Winter... and Spring” the same year, and Jang Joon-hwan’s cult classic “Save the Green Planet!” was also released. “A Tale of Two Sisters,” another highly praised film by Kim Jee-woon, was another 2003 product.

The 2003 drama “Silmido” became the first film in the country to top 10 million ticket sales, a record that would last not even a year with the 2004 film “Taegukgi” selling over 11 million tickets. The 10 million mark had gone from a landmark to a mere yardstick of success.

Another Bong film, “The Host,” met with both critical and commercial success in 2006, as did “Tazza: The High Rollers” the same year. The film industry had expanded in range, and flicks of many genres -- slasher, horror, art films and more -- were pouring out.

A rather unfortunate trend at that time was a rash of so-called “gangster comedies” -- mostly unoriginal movies featuring cheap jokes and predictable storylines. Those would not survive the decade.

The back-to-back success of “Old Partner” and “Breathless” in 2008 would prove that independent films were capable of major commercial success.

The 2008 hit “The Chaser” introduced Korean fans to the two actors who would be the face of Korean cinema for years to come: Kim Yoon-seok and Ha Jung-woo.

A series of hits -- 10 million-plus movies that started with “The Thieves” in 2012 --indicated that the Korean film industry was still going strong in terms of popularity: The 11 highest-grossing Korean films were released in 2010s. 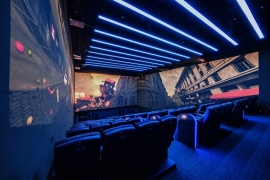 
The Korean film market has grown beyond all expectations. While its budget is still not on a par with that of Hollywood, it has definitely increased. But there are still issues lurking around the corner.

The death of screenwriter Choi Go-eun shined a light on the inadequate working conditions of film crews. The then-33-year-old Choi was reportedly plagued by poverty after a series of her projects capsized.

In 2016, the Korea Film Council, the Federation of Korea Movie Workers’ Union and the Korean Film Producers’ Association conducted a joint survey that found the average monthly salary of a movie industry staff member was 1.64 million won ($1,378) -- less than the monthly minimum wage for a four-person household (1.75 million won). It also showed that members of film crews worked an average of 12.8 hours a day, 5.45 days a week, with 69.4 percent saying they never took a vacation.

Since Choi’s death, a standard employment contract for film staff has been drawn up, but not every film production company uses it. Director Bong, who did use it when he shot “Parasite,” said he feels the industry is being “normalized” thanks to the new standards.

The latest controversy was touched off by “The Thieves” and “Masquerade,” both of which were released in 2012 and sold more than 10 million tickets each. Director Kim Ki-duk alleged that films distributed by major companies are “monopolizing” the screens, a controversy that intensified when “The Admiral: Roaring Currents” -- distributed by behemoth CJ Entertainment -- set an all-time record for ticket sales with 17.6 million in 2014.

Unlike the screen quota question of the past, which pitted Korean films against foreign films, this new controversy centers on big-budget versus small-budget films. Marvel’s “Avengers: Endgame,” which recently became the highest-grossing foreign film of all time, was hotly disputed when it was learned that the Disney-distributed film had been shown on 2,835 screens across the country at one point -- the highest number for any film in Korean cinematic history.

Last month, Culture Minister Park Yang-woo said the government was mulling limits on the number of screens per film, a response to growing calls to prevent blockbuster films from “monopolizing” theaters.