Na’s strident criticism of the Moon administration has been seen as a strategic move to cement the conservative party’s far-right support base, but it frittered away the possibility of clearing a backlog of pending bills and discussions on electoral reform in the extra parliamentary session that opened last week after a two-month standoff. 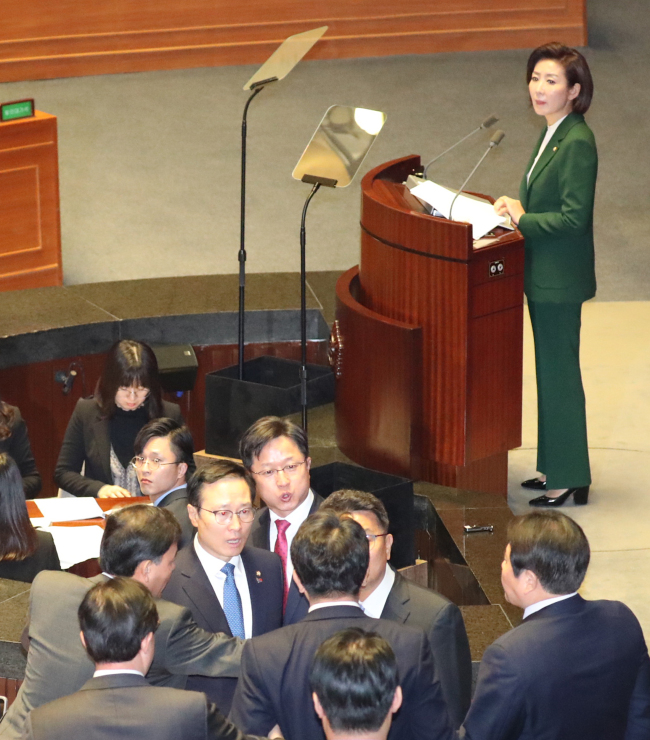 Liberty Korea Party floor leader Na Kyung-won (top right) stands at the podium as lawmakers of the ruling party and main opposition argue over her derisive comments targeting President Moon Jae-in at the main chamber of the National Assembly on Tuesday. (Yonhap)
In spite of the worsening political climate, Na said criticism from ruling party leader Lee Hae-chan is “an insult to the public” and “a self-confession of why it is a leftist dictatorship.”

Na condemned the ruling party’s decision to file a petition against her with the parliamentary ethics panel for speaking on behalf of the people as the main opposition floor leader, claiming it was tantamount to filing a petition against the public.

The Liberty Korea Party demanded an apology from lawmakers who shouted and left the chamber in protest of Na’s speech, and said it plans to file an appeal against ruling party floor leader Hong Young-pyo with the parliamentary ethics committee for interrupting Na’s speech.

“Unlimited support for North Korea and speaking on behalf of North Korea has become embarrassing. We no longer want to hear that the South Korean president is the top spokesperson for Kim Jong-un,” Na said in the main chamber of the National Assembly on Tuesday.

The remark instantly drew loud criticism from ruling party lawmakers, with the floor leader of the ruling Democratic Party of Korea appealing to National Assembly speaker Moon Hee-sang, while some lawmakers headed for the exits.

As the quarrel unfolded and interrupted the speech, Na flashed a faint smile and called on ruling party lawmakers to quiet down.

“Na’s parliamentary speech lacked philosophy and vision for policies. Rather, it was a strategic one intended to rally far-right supporters and show that she could take on the mantle of leading extreme conservative politics,” said Yang Seung-ham, a professor emeritus at Yonsei University.

“As seen at the national convention last month, pro-Park supporters have become the core base of Liberty Korea Party. Na is continuing the party’s sprint toward far-right leaning conservatism, which is an alarming move.”

In response to Na’s speech, the ruling party on Wednesday filed a petition backed by all 128 members with the parliamentary ethics panel, seeking to punish Na and prevent a recurrence.

In an urgent meeting convened after Na’s speech, Democratic Party leader Lee lambasted Na and denounced the derisive remarks as an “insult to the state head.”

The minor conservative Bareunmirae Party, minor liberal Party for Democracy and Peace and minor progressive Justice Party also criticized Na and the main opposition for the speech, as well as for holding back vital pending discussions.