Two short track speed skaters will be suspended from representing the national team after they were expelled from the national training center for violating dormitory rules, an official with South Korea's skating body said Thursday.

An official from the Korea Skating Union said that Kim Gun-woo and Kim Ye-jin will not be able to compete in upcoming international competitions after they were kicked out from the National Training Center in Jincheon, North Chungcheong Province, some 90 kilometers south of Seoul. 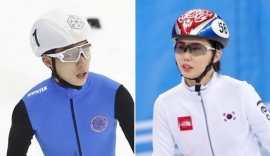 "Kim Gun-woo and Kim Ye-jin are not permitted to enter the national training center for three months and one month, respectively, by the Korean Sport & Olympic Committee," a KSU official said. "If they are kicked out of the national center, their status as national team athletes are also suspended, meaning they can't compete for the national short tracking skating team."

The official said that with the KSOC suspension, the KSU decided not to send the two skaters to the 2019 World Short Track Speed Skating Championships in Sofia, Bulgaria, that start March 8.

Kim Gun-woo, who turns 21 next month, will also miss the 2019 Winter Universiade in Krasnoyarsk, Russia, that kicks off Saturday.

The KSU said Park Ji-won and Choi Ji-hyun will take the two athletes' spots at the upcoming worlds.

Kim Gun-woo was caught trespassing in the women's dormitory in the training center Sunday. Kim Ye-jin apparently helped him enter the dormitory.

Kim Gun-woo was seen by a female athlete in the building who later reported it to the training center officials. After confirming Kim Gun-woo's entrance through surveillance video, the KSOC decided to expel the skater for three months and also banned Kim Ye-jin for one month for helping him.

"Kim Gun-woo said he was there to give medicine to Kim Ye-jin, who had cold symptoms," a KSU official said. "Kim Ye-jin gave Kim Gun-woo her pass card to enter the women's dormitory."

The KSU said its discipline committee will hold a meeting next month to mete out punishment against the two skaters.

If the two athletes receive a one-month or longer ban from competing in skating competitions, they will also lose their chance to become national team members for the 2019-20 season. The national team selection competition is to be held April 3 and 4, and the deadline to submit applications is March 25. (Yonhap)