While global mobile manufacturers are rushing to unveil their next-generation smartphones at Mobile World Congress 2019 -- to take place from Monday to Thursday in Barcelona, Spain, next week -- Korean network services have announced that they will use the opportunity to unveil new VR games alongside their 5G services. 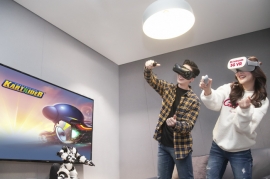 SK Telecom, the biggest mobile carrier in Korea, said Tuesday that it has bought the intellectual property rights of iconic Korean games “Crazyracing Kartrider,” “Crazy Arcade” and “Bubble Fighter” from Nexon, intent to develop VR versions of the games. The games will be jointly developed with VR game specialist PixelPimps. SK Telecom expects to launch the mobile VR games in the first half of this year. In the meantime, the world will get the first glimpse of the developments at MWC 2019.

KT will showcase a VR baseball game at MWC 2019, which is to be included in the lineup of its 5G multiplayer game “VR Sports,” co-developed with Appnori. The game will be available on KT’s GiGA Live TV, which launched in November 2018. The service enables wireless VR experiences.

The sports game will also include table tennis, badminton and more, KT said. Several people will be able to play together at once.

KT has been developing the games since late last year with Appnori, and has secured exclusive domestic and overseas sales rights.

The company believes the proliferation of the 5G network, which touts fast connectivity and low latency, will lead to a burgeoning market for wireless VR games. KT will continue to bolster more entertainment contents for the new environment. 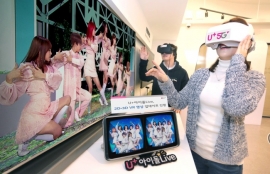 LG Uplus will unleash a set of augmented reality and virtual reality contents ranging from golf to live K-pop performances at MWC 2019.

Using the benefits of 5G, which enables uninterrupted streaming of sports events and musical concerts in high-definition, LG Uplus is seeking to deliver on-demand VR contents.

Its cutting-edge service will allow viewers to observe a golf club’s swing from various angles and see the trajectory of a flying ball in augmented reality.

In an earlier conference call detailing last year’s performance, LG Uplus said it is developing AR and VR contents in partnership with Google, with the aim of leading in the AR and VR market.