Nichkhun, a Thai-American member of boy band 2PM, will release Monday his first solo album since his debut in the band 11 years ago, his management agency said.

The album "ME" has nine tracks, all composed and written in English by Nichkhun himself, according to JYP Entertainment. 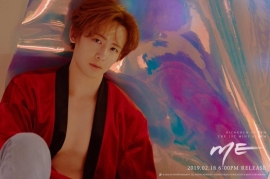 It is fronted by "Lucky Charm," a song that combines mellow melodies with Nichkhun's sweet voice.

The song "carries a story about fantasy and reality. It may come more soothing if you listen on a lazy morning or before going to bed," Nichkhun was quoted as saying.

The album will be available for streaming starting Monday evening in South Korea, as well as in China and Thailand.

"ME" also includes a special song dedicated to his fans, "Umbrella," which will be provided in four different languages of Korean, English, Chinese and Thai, JYP said.

"For the past 10 years, Hottest has been protecting me from rain," Nichkhun said, referring to the fan community of 2PM. "I wanted to pay it back. 'Umbrella' is a very honest song that I made to say to fans that 'From now on, I will become an umbrella for you,'" he said.

The record also includes "HOME," the only ballad of the nine tracks, "Mars" and "Colorful X'mas."

On March 7, the Thai film "Brother of the Year," where Nichkhun played a lead role, will also hit local screens in South Korea. (Yonhap)