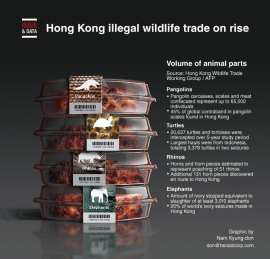 Illegal wildlife trade in Hong Kong is booming, according to a new study.

In a report, conservation groups said Hong Kong has become a hub for wildlife crime, as millions of animals, plants and their derivatives are trafficked through the city every year by organized smugglers who rarely face stiff penalties.

According an analysis of seizures for three commonly trafficked species since 2013, the volume of animal parts could equate to the death of 3,000 elephants, 65,000 pangolins and 51 rhinoceros.