LAS VEGAS –- Samsung Electronics will hold the GalaxyS10 Series Unpacked event in San Francisco in mid-February, according to the industry Wednesday.

Sources told The Korea Herald that the 10th edition of Galaxy S phones will be unveiled in the US city -- home to world’s most innovative tech firms –- one week ahead of the Mobile World Congress 2019 that kicks off in Barcelona, Spain on Feb. 28.

Samsung was widely expected to announce the S10 series at MWC 2019 in Barcelona as it did for the predecessor S9 series.

However, there reportedly has been a discussion about changing the place and timing of the Unpacked event to mark the 10th anniversary of the Galaxy phone this year. 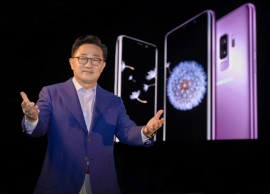 It is presumed that Samsung could have moved forward the announcement by taking into account Huawei’s possible debut of its first foldable smartphone at MWC in late February.

Meanwhile, the schedule for the release of Samsung’s first foldable smartphone hasn’t been confirmed, a high-ranking Samsung official said.

“Because it is the first foldable phone by Samsung, we are thinking more about offering some powerful contents for better user experiences that can be earned only from the foldable phone,” the official said.

Considering that Samsung exclusively showcased a nearly completed prototype of its foldable phone to executives of major business-to-business customers at the Consumer Electronics Show 2019 in Las Vegas, some in the industry have said its debut may also imminent.

According to the Samsung official, the foldable phone -- temporarily dubbed “Galaxy F” -- would come with a price tag of around 2 million won ($1,788). Just 1 million Galaxy foldable phones will be released into markets starting in Korea and then in the US, China and Europe.