[Graphic News] Samsung No. 1 in number of patents filed for self-driving cars 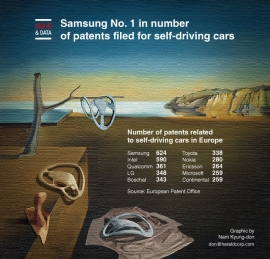 According to the data compiled by the European Patent Office, the number of applications related to self-driving cars filed in Europe was 3,998 in 2017, growing more than threefold from 922 in 2011.

Samsung Electronics holds the largest number of patents between 2011 and 2017, 624, with US company Intel ranking second with 590.