No deaths were reported and the Korea Railroad Corp., the operator of the train, said the accident seems to be attributable to a rail problem caused by freezing weather. 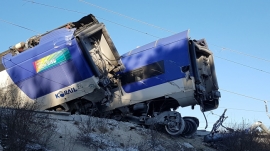 The train, with 198 passengers aboard, went off the tracks at around 7:35 a.m., minutes after departing from Gangneung, a city located 237 kilometers east of Seoul. It was running at about 103 kph, approaching Jinbu Station.

A total of 15 passengers suffered injuries, mostly relatively light ones, and received medical treatment at nearby hospitals.

"I was traveling from Gangneung to PyeongChang in the sixth car. But shortly after the train departed, it went off the tracks with a thud," a 22-year-old passenger said. "It was as if the train slid for around 50 meters, and I could hear the train dragging pebbles with a metallic sound."

Oh Young-sik, CEO and president of KORAIL, said the cause of the accident is presumed to be trouble in rail conditions amid a sudden drop in temperature.

A transportation ministry official later told reporters that government investigators are conducting a probe into the exact cause.

The KTX operation of the Jinbu-Gangneung section will likely remain suspended throughout the weekend, while other trains are running as scheduled from Seoul to Jinbu.

The recovery work is expected to finish at around 2 a.m. on Monday, according to the ministry.

Currently, authorities are operating 33 buses to transport passengers between Jinbu and Gangneung.

It was the first major accident on the rail connecting Seoul and Gangneung, which opened on Dec. 22, 2017, ahead of the PyeongChang Winter Olympics.

The route is significant as it enables passengers to travel from Seoul to Gangnueng in around 1 1/2 hours, whereas it takes three hours by bus. (Yonhap)