[From the Scene] Culmination of years of preparation, Suneung is here

Just a day before Thursday’s college scholastic ability test, or Suneung, a tense atmosphere prevailed as students geared up for the exam for which they have long prepared. Authorities also took nation-wide measures to support test takers.

At Yongsan High School, third-year students left the school early while their juniors lined up on the sidelines to cheer those who would take Suneung the next day. 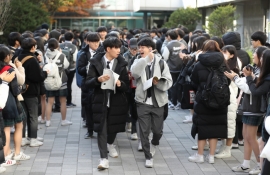 Third-year students leave the school gate as their juniors and teachers cheer for them, a day before Suneung, or the national college entrance exam, at Seocho High School in Seoul on Wednesday. (Yonhap)

Kim Young-joo, a third-year student from Dongsung High School called the exam the “start” of his life, as he can now focus on achieving his goal of becoming a Catholic priest.

“I am happy it ends tomorrow. I think I have worked enough to get into the college I want,” Kim told The Korea Herald.

For Lee Woo-seok, a 23-year-old conscripted policeman, this year’s Suneung is his second. He was OK with his previous college life, but he wanted to give it one more try.

“It is for my personal satisfaction, and I want to challenge myself and prove that I can do better,” he said.

“For the teachers, it may be an annual event, but it is an exam that can be a symbol finalizing 12-years of elementary, middle and high school education. And the final stage of their first phase of life,” said Hong Hee-sung, a teacher managing third-year students at Yongsan High School, told The Korea Herald.

“I also think the exam may be the first big event that makes them think about the direction of their life, as an adult.” 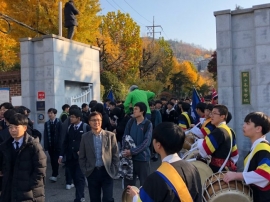 Seniors leave the school gate as other students and teachers cheer them on, a day before Suneung at Yongsan High School in Seoul, Wednesday. (Jo He-rim/The Korea Herald)

President Moon Jae-in left a message of support on his Facebook account on Wednesday, and ordered relevant ministries to carry out safety checks and strict management of the exam.

“Good job on your efforts to prepare for Suneung for a long time. The time you have spent competitively (for the exam) is with you. Believe in it, and you will be able to show your full competence,” Moon said. He is currently on a four-day trip to Singapore for ASEAN summits.

According to the Education Ministry, 594,924 people are taking the test this year, 11,397 more than last year.

The ministry began the distribution of test papers and answer sheets to 86 test zones across the nation on Monday. These were to be kept in tight security until distribution early Thursday morning to 1,190 schools and other test venues. 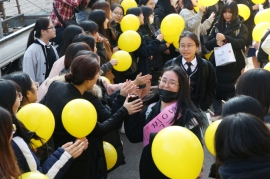 Seniors leave the school gate as other students and teachers cheer them on, a day before Suneung at Seolwol Girls’ High School in Gwangju, Wednesday. (Yonhap)

City and provincial governments have also taken support measures for the national exam. Seoul City expanded the operation of public transportation. The city has also secured an extra 790 vehicles and motorcycles to be dispatched near subway and bus stations to provide free transportation for test takers going to the test sites, in emergency situations.

Airplane takeoffs and landings at airports near test sites are to be halted during the English hearing test from 1:05 p.m. to 1:40 p.m. and activities at nearby construction sites will also be requested to stop.

Banks, stock markets and government offices are to open an hour late at 10 a.m. to keep traffic off the streets.