Ratio of unredeemed student loans edges up in 2017

According to the data from the National Tax Service, 14.5 billion won ($12.8 million) in student loans that should be repaid after borrowers' employment was not paid back last year, taking up 8.1 percent of the total of such loans tallied at 179.4 billion won.

The ratio was up from 7.3 percent the previous year, marking the first on-year increase since the government started compiling related data. 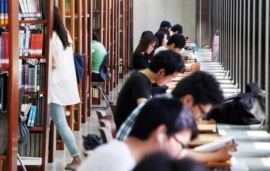 It was also the highest nonredemption ratio since the 13 percent recorded in 2014.

Last year's increase was attributed to the country's job instability among youths, which made borrowers less willing to pay back debt due to jitters over their future.

"There is a high possibility that the rate increase stemmed from job instability and the recent sluggishness of the local economy," a government official said.

As of end-August in 2017, 2.13 million college graduates held nonregular jobs, or roughly 33 percent of the country's total temporary workers.