Yonsei University spoke with The Korea Herald on Monday, denying widespread rumors that Angelina Jolie’s son was on the list of applicants for any of its 2019 programs.

The actress visited Korea Nov. 2-4 as a special envoy of the United Nations High Commissioner for Refugees to express her support for Yemeni refugees in Korea. During her stay here, she took time out for a campus tour of Yonsei University with her two sons, Maddox and Pax. 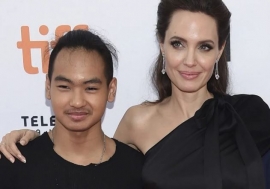 The tour sparked rumors that Maddox, 17, had applied to study at Yonsei and had attended an interview on Saturday, but the school clarified that “the family attended the campus tour based on personal interest” and “rumors regarding Jolie’s son’s admission are not true.”

The rumors started with an article in the US magazine People, which reported that Maddox had spent considerable time studying the Korean language and was interested in studying in Korea. Also, public information officer Shin Heinn of UNHCR Korea was quoted in the local media as saying, “Jolie’s son Maddox mentioned he wishes to continue his studies in Korea.”