[ The Korea Herald – Send E-mail ]
Banks ready for inter-Korean economic cooperation
By Bae Hyun-jung
Published : Sep 20, 2018 - 17:13
Updated : Sep 20, 2018 - 17:42
Fired up by the thawing peninsular mood built on the latest inter-Korean summit, banks here have buckled down on establishing business in the North in the near future, their initial focus fixed on the resumption of the Kaesong industrial park and Kumgangsan tours.

Steering the move are the state-run banks that strive to win an upper hand in infrastructure financing, as well as Woori Bank and NH NongHyup Bank, which had operated businesses in the joint operations zones in the past.

On Wednesday and the second day of the three-day summit, President Moon Jae-in and North Korean leader Kim Jong-un announced that they will resume inter-Korean projects at Kaesong and Kumgangsan as soon as conditions are met.

Rejoicing at the news was Woori Bank, currently poised to kick off banking operations at any given time in the Kaesong industrial park, according to officials Thursday. The bank had operated in the zone for eight years from 2004, providing deposits, withdrawals, remittances and all other basic banking services to resident companies and workers.

It once withdrew in April 2013, upon Pyongyang’s third nuclear test, but soon resumed business in September that year, until the final termination in February 2016.

Even after Seoul’s government shut down the industrial facilities amid heightening inter-Korean conflicts in 2016, the bank maintained a temporary bank window of the Kaesong office on the basement floor of its headquarters, in the hopes of resuming business in the North Korean region.

This special corner is in charge of the follow-up financial management of the companies that evacuated from the now-deserted industrial zone. 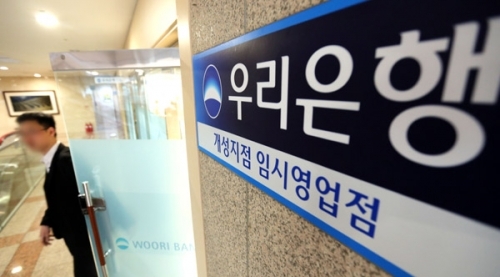 The temporary office for Woori Bank`s Kaesong Industrial Complex branch. (Yonhap)
“Woori Bank’s qualification as the bank in charge (at Kaesong) remains valid to this day. It is just the geopolitical situations that have been keeping us off over recent years,” said an official of the bank.

“The resumption of the banking business in Kaesong is for the Unification Ministry to decide, but once the government approves, we are fully ready to take the related computing system and database and start operations.”

Another hopeful is NH NongHyup Bank, which had provided currency exchange, deposit and loan services at Kumgangsan from 2006-2009, when the tourist business was active.

NongHyup’s Kumgangsan office was also significant in that it was the agricultural cooperative-based bank’s first “overseas” office, authorized by North Korean authorities, according to officials.

In the public sector, Korea Development Bank and Export-Import Bank of Korea aspire for the infrastructure and other social overhead capital construction expected to pick up momentum in the underdeveloped North, should the peninsular situation make further progress.

While KDB Chairman Lee Dong-gull was the only financial chief official to take part in the president’s special delegation in the latest Pyongyang visit, EXIM Bank chief Eun Sung-soo has recently underlined the bank’s role in the inter-Korean economic cooperation and development.

“For now, it seems that KDB chief Lee has control in establishing the (financial) blueprint,” Yoon Suk-heun, governor of the Financial Supervisory Service, told reporters Wednesday.

“Once the government and state-run institutions figure out the (road map for) economic cooperation, then the FSS will find its role in the big picture.”