With the arrival of the 21st century, innovation has increased connectivity among people to an unprecedented level, redefining communication.

Speaking at the Herald Design Forum 2018 at Dongdaemun Design Plaza in Seoul on Friday, Junji Tanigawa, a Japanese spatial designer, entrepreneur and author of “The Space Composer” stressed the role of a spatial designer in the new era as a context provider who helps visitors memorize a space and fulfills expectations that people have about the space. 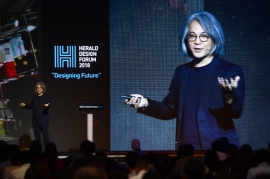 Sharing his methodology in spatial design, the 53-year-old Tanigawa, who is also chief executive at Japanese space creation consulting firm JTQ, said hyperconnectivity in the 21st century inspired him to take a new approach.

This shift came about as people began to prioritize context rather than content when sharing values and information, compared to the end of the 20th century when people focused on content, he said.

He added that thus was in tune with JTQ’s culture-oriented approach, allowing visitors to create new expectations based on their memories in a certain space.

“When we put culture at the center, then we place more value on personality,” he said. “It means a collection of lifestyles. We try to focus on small-scale communities where people’s souls are connected, which leads to diversity.”