The Ministry of Culture, Sports and Tourism has decided not to renew the term of Bartomeu Mari, the director of the National Museum of Modern and Contemporary Art, Korea.

Museum officials on Wednesday said they had received official word from the ministry on Tuesday. 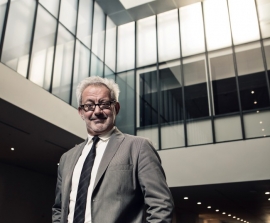 Bartomeu Mari, the director of the National Museum of Modern and Contemporary Art, Korea. (MMCA)

The officials said the Culture Ministry had cited calls from within the domestic art world for the museum to focus more on Korean art when explaining its decision. However, a Culture Ministry spokesperson said details concerning the decision could not be disclosed.

During his three-year term, Mari focused on mapping out mid- and long-term plans for the art museum and on promoting Korea’s modern and contemporary art abroad.

“It is a privilege to lead such a major museum, one that has become amongst the largest globally in size, a leading pioneer of its kind in Asia,” said Mari in a statement released Wednesday afternoon. “I have acquired an unforgettable wealth of knowledge of the modern and contemporary art of Korea through serving the MMCA.”

During the remainder of his term, Mari said he would see the museum’s 2018 exhibitions through to completion and that planning its 2019 programs would also be a high priority.

“It is my conviction that continuity and stability are central to the success of any museum and my wish is that these conditions will be found as the museum enters its next stage,” he said.

It is widely expected that the next director of the state museum will be a Korean national. The museum in the past was widely criticized for being influenced by a factional struggle between two groups with different artistic visions -- one centered on graduates of Seoul National University and the other comprising Hongik University graduates.

Free from any such association, Mari was relatively unfettered by external influences.

In an interview last month with The Korea Herald, he alluded to the power struggle surrounding the museum.

“The interests of some are being constantly projected into the museum, which is seen as an instrument to satisfy personal benefits and the interests of small groups. MMCA must serve the Korean society at large, all Korean citizens, not some interests only,” he said.

The Culture Ministry will begin the recruitment process in early October.