South Korea defeated Japan 5-1 in a key baseball game on Thursday that kept alive the hope of a third straight Asian Games gold.

South Korea launched three solo home runs and pounded out 14 hits in the super round game at GBK Baseball Field in Jakarta.

South Korea will face China on Friday at the same venue in the final super round game and must beat the heavy underdog to have a chance to reach the gold medal match. 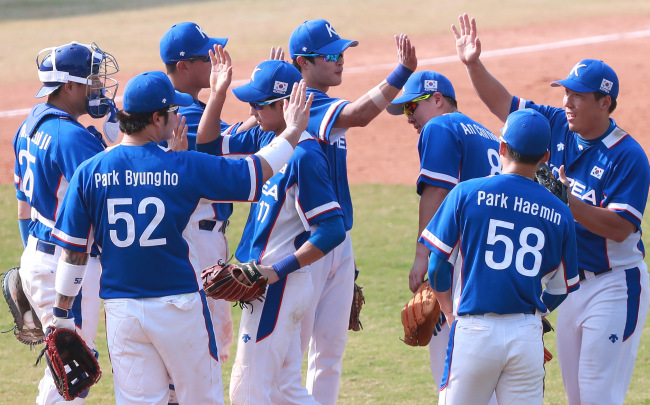 Under tournament rules, the four qualified teams‘ head-to-head records from the preliminary round carry over to the super round.

This means South Korea, following a 2-1 opening defeat to Chinese Taipei, brought that loss to the super round and is now 1-1 in this stage.

Chinese Taipei will improve to 2-0 if it beats China as expected later Thursday.

If Chinese Taipei and South Korea win both super round games, then they will clash in the gold medal game.

If Chinese Taipei loses both super round games and South Korea beats China on Friday, then South Korea and Japan will collide in the gold medal game.

Not all was positive for South Korea in the victory. Starter Choi Won-tae left the game after two shutout innings with right elbow pains. The right-hander’s status for upcoming games wasn‘t immediately known.

Shortstop Kim Ha-seong and first baseman Park Byung-ho, teammates on the Nexen Heroes in the Korea Baseball Organization (KBO), each blasted a solo home run in the top of the third. Kim first took starter Katsutoshi Satake over the left field wall, with left fielder Kohei Sasagawa barely moving from his spot. Two batters later, Park hammered a line drive shot over the deepest part of the park at left center.

Park also flashed the leather at first base in the second inning. With a man at second with two outs and starter Choi Won-tae struggling to find the zone, Park made a fine sliding catch to his right to rob Momotaro Matsumoto of an RBI hit.

Japan had men at the corners with two outs in the third, but South Korea’s second pitcher, Lee Yong-chan, got Koji Chikamoto to pop out to shortstop to escape the jam.

And South Korea made Japan pay for the missed opportunity, as Hwang Jae-gyun blasted his tournament-leading fourth home run in the top of the fourth.

On a 0-1 count, Hwang jumped on a hanging curveball that dropped in at belt-high and sent it well over the left field wall.

Hwang, who had batted eighth in three previous games, hit in the ninth spot in this game.

South Korea added two runs in the fifth to go up 5-0, thanks to Yang Eui-ji‘s RBI double and Son Ah-seop’s groundout.

Japan got a run back in the bottom of the sixth with Sasagawa‘s sacrifice fly. Japan pressed for more one last time in the bottom of the eighth. But with runners at the corners and one out, South Korean reliever Ham Deok-ju struck out Japan’s Nos. 3 and 4 hitters, Chikamoto and Sasagawa, to quell hopes of a comeback.