The Galaxy Note 9 is all about the “smart S Pen” that has been equipped with Bluetooth technology for the first time, creating convenience for users of the 6.4-inch phablet device, one of the world’s biggest phones.

Unveiled at Barclays Center in New York at midnight on Thursday, the ninth edition of Samsung Electronics’ Galaxy Note phablet phone puts emphasis on the enhanced S Pen that is deemed the only differentiation point from other competing devices. 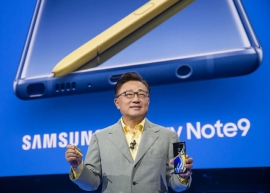 The low-power Bluetooth-enabled S Pen will allow users’ hands to be off from the phablet device for operations of frequently used applications -- including the camera, gallery, video player, music player, voice recorder, YouTube, Snapchat, Snow and PowerPoint -- by remotely controlling the device with the pen.

With a click on the S Pen button for a longer time, users can open the camera app and manipulate it to take a selfie with a short single click. Two short clicks will let the camera get out of the selfie mode.

The pen can also act as a pointer for PowerPoint presentations, by clicking the button for changes of slides.

Users can set their favorite or frequently used apps to be run by the S Pen.

Samsung plans to soon release the software developer kit for the S Pen to outside developers in order to connect the pen with more apps for remote manipulation, the company said.

The S Pen is fully charged in 40 seconds when it is inserted into the device, while it can be used apart from the phone for 30 minutes. 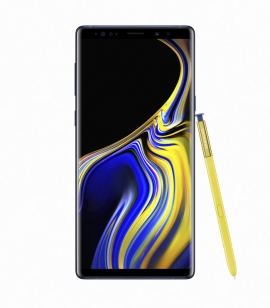 Koh Dong-jin, Samsung’s mobile business chief, described the newest device as “the new super powerful Note” at a press conference held in New York, which was attended by around 4,000 industry officials and tech media outlets from across the world.

“Note has been the greatest phone that has been setting new innovation standards in the mobile world,” Koh said. “Note 9 is the greatest of all equipped with top performance, functions and intelligence.”

The Samsung Galaxy Note 9 has adopted the biggest organic light-emitting diode display that is as large as 6.4 inches, as well as a 4,000-miliamphere-hour battery pack.

The new Note 9 will be released in two models -- 128- and 512-gigabyte -- and in four colors: Midnight Black, Ocean Blue, Lavender Purple and Metallic Cooper.

The new phones will officially hit the market on Aug. 24 globally.