Offshore institutional investors have often come across a lack of financial information about South Korean securities when building an investment portfolio for Asian markets.

Some 3 million privately held Korean companies are barely on the map. Relevance from overflowing information about listed companies in Korea -- largely embellished -- was also hard to find.

These circumstances came despite a moderate level of Korean market representation in Asian markets. In the MSCI AC Asia Pacific ex Japan Index as of June, Korean constituents made up 13.5 percent.

To investors hunting for undervalued promising companies here, uncluttering information and materializing significance have been a tall order. 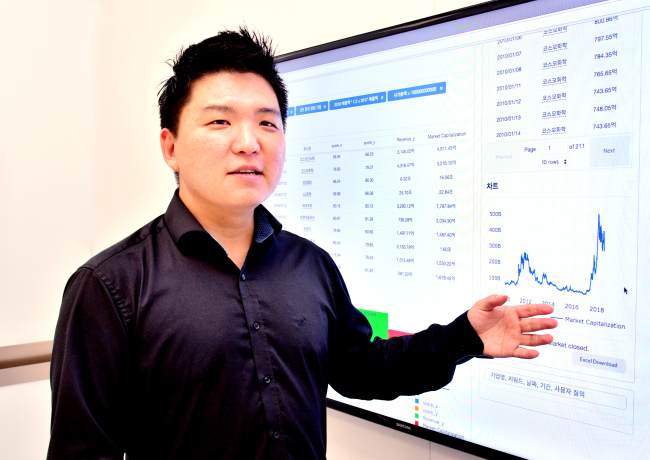 Teaming up with information providers such as Thomson Reuters and NICE Information Service among others, DeepSearch was able to collect and process raw financial data, and make such data “touchable,” Kim said.

“Our job is to impose a structure on raw financial data, so that investors would find significance in the database,” Kim said, comparing nonstructured financial data with “a telephone directory.”

Founded in 2013, DeepSearch, formerly known as Uberple, is now stepping up to become a Korean equivalent to US software company Kensho.

The subscription-based DeepSearch service would offer clients financial data analytics at a glance through a simple keyword input on a search engine, if launched in September as planned.

For example, all a customer would do is put keywords on a search bar like “annual revenue over $1 million,” “privately held companies,” “seeing over 20 percent on-year rise in net income” or “dedicated to new and renewable energy industry.” DeepSearch will show the customer relevant companies in a search result.

In particular, Kim emphasized its partnership with NICE Information Service, which enabled DeepSearch to process data on companies that were not listed.

“Investors like venture capitalists, banks and insurance companies have had one need in common,” Kim said. “There has been a need to find investable small companies. Our service will make data about them accessible.”

“As a venture capitalist, it was always hard to find a company that went well with a certain investment scheme,” he said. “The inconvenience I experienced back then laid the groundwork for the startup idea.”

DeepSearch is capable of processing a financial database of over 30 years, comprising over 2 billion units. The database is subject to data analytics and natural language processing by the fintech startup’s artificial intelligence engine, Kim said.

DeepSearch’s search engine will analyze financial data in the Korean language, as well as those in English provided by Thomson Reuters, when launched. 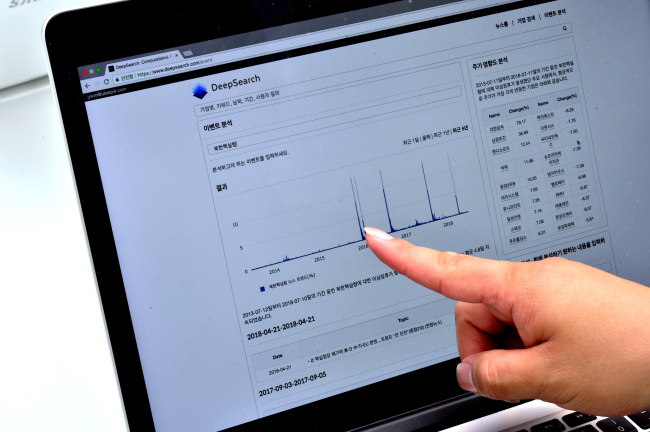 A DeepSearch service demo is displayed on a laptop. (Park Hyun-koo/The Korea Herald)
Alongside DeepSearch, the fintech startup has operated other AI-powered functions, such as SNEK, an investment information provider targeting retail investors, as well as Uberple Data Intelligence, which provides an open application programming interface to institutional investors.

The backbone of all three functions constitute a search engine, machine learning technique and calculation engine.

Further applying the technology, the startup aims to take to semantic indexing by partnering with asset management companies, according to Kim. Moreover, the startup would be able to sophisticate natural language processing so that the engine could notice a slight change in the tone of stock analyst reports, and investors could be alerted pre-emptively by “abnormalities” related to a company.

DeepSearch has clinched deals with hedge fund counterparts in Hong Kong, according to Kim. Also, parts of DeepSearch’s functions are mounted on Thomson Reuters Eikon in Hong Kong.

The startup envisions business expansion in China, Singapore and Japan, with its focus on data about their companies not listed on stock markets.

Currently, the 13 member-strong startup is located in the Samsung Seoul R&D Campus, partly to take part in a a project with Samsung affiliates.

Having drawn some 5.2 billion won ($4.6 million) in venture capital investments, Kim said the startup has yet to come up with a plan for a Series C investment.