[ The Korea Herald – Send E-mail ]
‘Apple still on way to innovation’
Former Apple marketing expert says smartphone innovation is nearing end
By Cho Chung-un
Published : Jul 19, 2018 - 16:14
Updated : Jul 19, 2018 - 16:14
SEOGWIPO, Jeju Province -- People still think that Apple’s success is in its pioneering work that revolutionized the world with devices beyond imagination. But it is a misled idea and in fact, it is quite the opposite, said a former creative director who spent 12 years with the late IT guru Steve Jobs marketing iconic products.

“Apple’s version of innovation is not being the first in the world to come out with the new kind of product category,” said Ken Segall during a press conference on Thursday after giving a lecture about the power of simplicity at the Jeju Forum hosted by the Korea Chamber of Commerce and Industry. 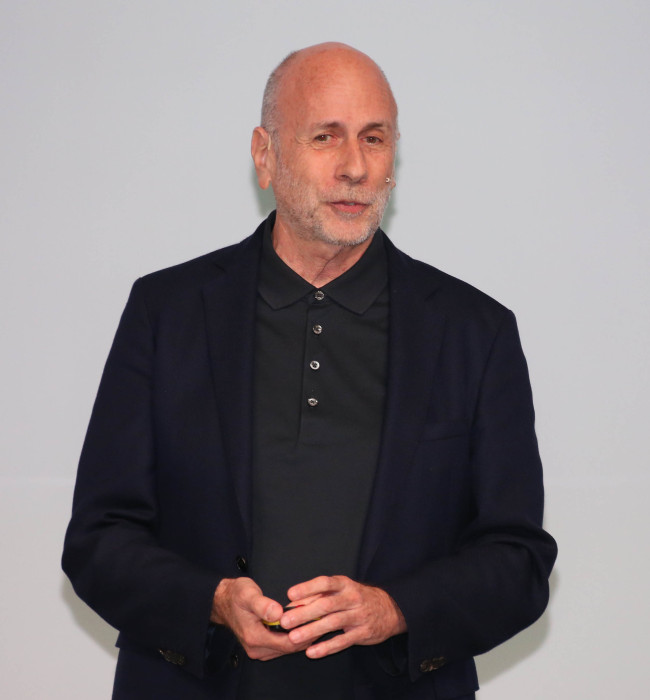 Ken Segall, former creative director for Apple (KCCI)
Before the iPhone, there were phones that had small screens and keyboards, but it was Apple that made them the best, becoming a leader, said the expert who was behind the company’s “Think Different” campaign.

“Steve was quite unique and will never ever be replaced. So it is impossible for Apple to be the same. But I think his value is there, and brilliant people are there, so things move forward. I think the innovation is happening in a same pace, really.”

Asked about differences between the two rivals Samsung and Apple, Segall said they are different in their philosophies.

Referring to the seven-year patent battle between the two that ended in a settlement last month, Segall said both companies “borrowed” ideas from others in the course of making the smartphones.

“Samsung has definitely borrowed ideas from Apple, but at the same time Apple has borrowed many ideas from other people. It is a legal issue I suppose.”

The marketing expert also added that innovation in the phone category is nearing its end, just like PCs, though there is still room for innovating voice activation.

“I think phones are very mature products right now, (we should) not necessarily expect huge leaps. It could likely become a commodity as we all move toward wearable technology.”

Segall is the author of the best-selling book “Insanely Simple.”