[ The Korea Herald – Send E-mail ]
Moon hopes to declare end to Korean War this year; experts say not impossible
By Ock Hyun-ju
Published : Jul 12, 2018 - 17:11
Updated : Jul 12, 2018 - 20:46
South Korean President Moon Jae-in said he hopes to declare a formal end to the 1950-53 Korean War this year, and discussions are underway among the two Koreas and the US, but there are stumbling blocks along the way, according to experts.

In a written interview with the Straits Times conducted before his overseas trip to India and Singapore that kicked off Sunday, Moon said that declaring an end to the Korean War would be a milestone toward permanent peace.

“As agreed in the Panmunjeom Declaration, my government’s goal is to declare an end to the war this year, the 65th anniversary of the signing of the armistice,” he said.

“As for the timing and format (of the official declaration), we will closely consult with North Korea and the US and others. There have been additional discussions for that matter.”

In the joint statement signed by Moon and North Korean leader Kim Jong-un at the April 27 inter-Korean summit, the leaders agreed to work for the complete denuclearization of the Korean Peninsula and formally end the Korean War this year.

“There is a consensus to some extent that South Korea, North Korea and the US will declare an end to the Korean War, and we continue to take interest and make efforts,” said Cheong Wa Dae spokesman Kim Eui-kyeom during a briefing Thursday. 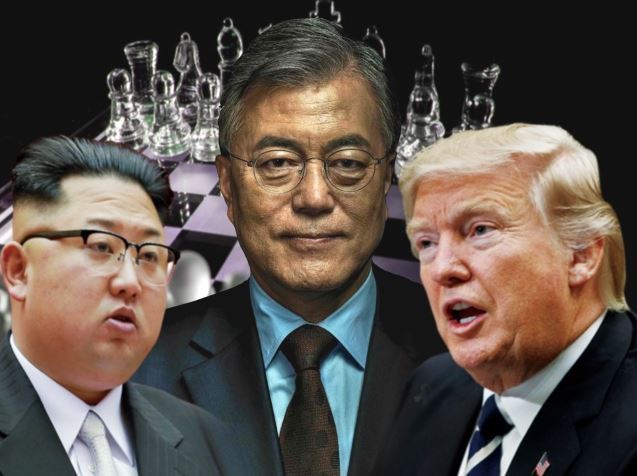 (Yonhap)
Bringing a formal end to the Korean War, which ended in an armistice, not in a peace treaty, is seen as the first step South Korea and the US could take to guarantee the North Korean regime’s security as they continue to push forward in negotiations for North Korea’s denuclearization.

Before the historic summit between the US and North Korea on June 12 in Singapore, expectations were high for a possible three-way summit involving Moon, Kim and US President Donald Trump to declare an end to the Korean War. Trump himself said he hopes the war “will soon end,” following the summit.

In a sign of a possible shift in Washington’s stance, however, US Secretary of State Mike Pompeo balked at a proposal to discuss the declaration of an end to the Korean War by North Korean officials during his visit to Pyongyang last week, according to the North’s state-run media.

The US might have realized that declaring an end to the Korea War, which experts say is a political statement that is not legally binding and technically not difficult, is one of few remaining bargaining chips in negotiations with the North.

“The US would have to consider that declaring an end to the war could open a debate over a need to reduce arms on the Korean Peninsula and withdraw the US troops from South Korea,” said Kim Hyun-wook, a professor at the Korea National Diplomatic Academy.

Experts say declaring an end to the Korean War this year is not impossible, with South Korea’s role in persuading both North Korea and the US to bridge their gaps to be more important than ever.

“I think the US will make a decision in July, hold consultations in August and declare an end to the Korean War in September,” said Hong Min, a senior researcher at the Korea Institute for National Unification.

“It would be important to do so by the end of September, because that’s when both Trump and Kim have to show some political achievements to appeal to a domestic audience,” he said, pointing to Oct. 10, the founding day of North Korea’s ruling Workers’ Party, and November, the US midterm elections.

As for possible venues, Hong identified New York, where the UN General Assembly is held in September, and third countries like Switzerland.

Still, there are obstacles that could complicate the prospect.

As North Korea and the US appear to remain at odds over what should come first and be prioritized in the denuclearization process, how quickly they reach an agreement on the sequence is crucial.

“First, there should be a progress in denuclearization talks between North Korea and the US. The US will at least require North Korea to declare its nuclear weapons programs,” said Shin Beom-chul, senior researcher at the Asan Institute for Policy Studies.

“If there is such a progress, I think it is possible for a three-way meeting or a four-way meeting involving China to be held at the UN General Assembly in September,” he said.

“The South Korean government’s role is important to persuade North Korea to accelerate its denuclearization process and the US to be more supportive of declaring an end to the war.”

China, which has hinted at its willingness to engage in the process of ending the war and stressed its role in matters on the Korean Peninsula, could pose a challenge, Shin pointed out.

“If China is involved, it will delay the process of declaring an end to the war. But if it wants to be involved but is excluded, China will try to delay the process by wielding influence over North Korea,” he said.

In the Panmunjeom Declaration, Moon and Kim agreed to seek to hold three-way talks among the two Koreas and the US, or four-way talks involving China to pursue the declaration of the end of the war. The US and China are both signatories to the armistice.

The South Korean government has maintained that China could be left out of the process in declaring an end to the Korean War, but said its role is essential in signing a peace treaty.