[ The Korea Herald – Send E-mail ]
US-NK negotiations face tough road ahead: experts
By Ock Hyun-ju
Published : Jul 9, 2018 - 18:20
Updated : Jul 9, 2018 - 18:20
After the US top diplomat’s visit to North Korea laid bare fundamental differences between Washington and Pyongyang on how to achieve denuclearization of the Korean Peninsula, the follow-up negotiations are expected to be an uphill battle, experts say.

US Secretary of State Mike Pompeo’s visit to Pyongyang last week did not yield tangible outcomes, but the two countries kept the momentum of dialogue alive by agreeing to create a working group on verification. 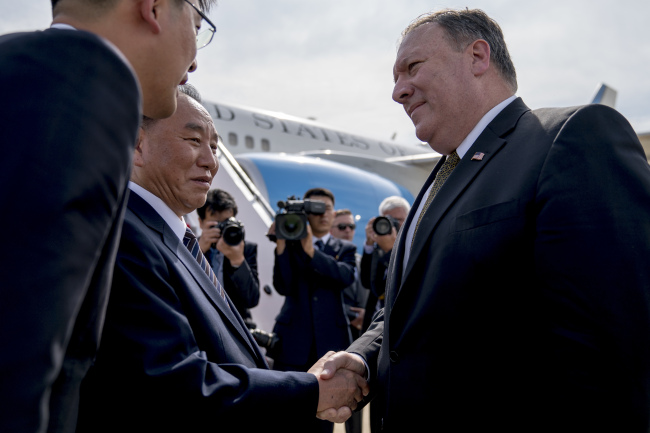 “The two sides have a fundamental gap, but they cannot ruin the momentum of dialogue, so they are leaving all important things to be discussed to working groups,” said Park Won-gon, a professor at Handong Global University. “Even if follow-up negotiations continue, there are only limited things that can be decided among working-level officials and a breakthrough is not likely.”

“To move the momentum forward, there should be another summit between the leaders of the US and North Korea to reach an agreement on the road map of denuclearization,” he said, adding the slow pace of follow-up negotiations was inevitable given the vague agreement made in Singapore.

Pompeo went to Pyongyang to discuss detailed steps for North Korea’s denuclearization to follow up on the Singapore summit in which North Korean leader Kim Jong-un met with US President Donald Trump and promised to work toward “complete denuclearization.”

The glaring differences between Washington and Pyongyang were in full view Saturday when Pompeo said his two days of talks with North Korean senior officials in Pyongyang were “productive” and had “made progress” on almost all of the central issues including a timeline for North Korea’s denuclearization and a baseline declaration for its weapons of mass destruction, only to be followed hours later by North Korea’s Foreign Ministry statement that said the outcome of the talks was “very concerning” and lashed out at the US for pushing a “unilateral and gangster-like demand” for denuclearization.

The US insists that it can grant North Korea rewards only after it substantially dismantles its nuclear arsenal and allows intrusive verification, while North Korea has demanded the US offer rewards, such as a formal end to the Korean War and early easing of sanctions, for every step it takes toward denuclearization.

“Given North Korea’s attitude, I believe the follow-up negotiations will be tough. The negotiations between the US and North Korea have been done in a top-down manner, and there were already many gaps that could not be closed at the top-level discussions. It would be difficult to flesh out details at working-level talks,” said Shin Beom-chul, a senior researcher at the Asan Institute for Policy Studies.

“If there is no progress in denuclearization talks before the US mid-term elections in November, there is a possibility of the Trump administration returning to its policy of maximum pressure against North Korea, economically and militarily,” he said.

Another factor is China, which is in an escalating trade war with the US. After three meetings with Chinese President Xi Jinping, North Korean leader Kim may be protracting negotiations with the US to increase his country’s leverage, Shin said.

Other experts offered more positive views, saying it’s only part of a process to reach an agreement and the differences between the US and North Korea are not too big to overcome.

“I think both sides are still trying to push forward the momentum of denuclearization. As the goal of achieving ‘complete denuclearization’ has already been confirmed between the leaders of the US and North Korea, differences will be reconciled in the follow-up negotiations,” said Ko Yu-hwan, a professor at Dongguk University.

And the ball is in the US’ court, he said.

“One of the things the US could do to persuade North Korea to denuclearize quickly is to agree to declare a formal end to the Korean War,” he added.

North Korea said that it had raised the issue of declaring an end to the Korean War on the occasion of the 65th anniversary of the armistice on July 27, which it said was a crucial first step toward building trust, but the US balked at it. The US is one of the signatories to the armistice that brought about the truce on the Korean Peninsula.

“I think the US’ hesitance to discuss declaring a formal end to the Korean War is a sign that the US is controlling the pace of denuclearization talks, given the criticism at home,” Koh said.

Another expert pointed out that North Korea made enough concessions and needs a reward to further convince its own officials.

“The North Korean leader would find it difficult to take further action to denuclearize when it already dismantled a major nuclear site and promised to close its missile engine test site. Kim Jong-un might be facing complaints internally within the regime,” said Cho Han-bum, a senior researcher at the Korean Institute for National Unification.

“The negotiation process will be difficult and long, but the momentum is alive, and I think the two sides will gradually make progress.”