[ The Korea Herald – Send E-mail ]
‘Ant-Man’ cast says following ‘Infinity War’ like playing after the Beatles
By Yoon Min-sik
Published : Jun 12, 2018 - 17:06
Updated : Jun 12, 2018 - 17:07
With the Marvel Cinematic Universe having taken a grave turn in the events of its last film, fans of the franchise will be treated to a more lighthearted tone in the upcoming “Ant-Man and the Wasp.”

Paul Rudd and Evangeline Lily, who respectively play the title characters, said being the immediate follow-up to the $2 billion success of “Avengers: Infinity War” is intimidating, but also exciting.

“It’s a bit like trying to follow the Beatles. We’re just happy to be at the show, doing our songs. We’re not going to try to outplay the Beatles,” said Rudd in an online press conference with Korean media. He reprises the role of Scott Lang and his alter ego Ant-Man, following the first standalone film in 2015 and an appearance in “Captain America: Civil War.” 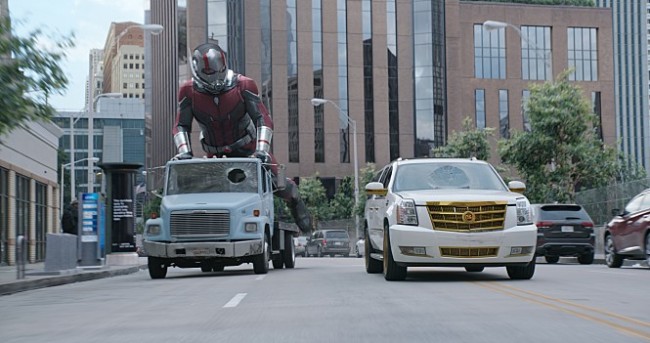 “Ant-Man and the Wasp” is the 20th feature film in the Marvel Cinematic Universe, and is set between the events of “Civil War” and “Infinity War.”

Lang’s actions in “Civil War” lands the shape-shifting superhero under house arrest, but Hank Pym and Hope van Dyne -- played by Michael Douglas and Lilly -- approach him with a mission. He now teams up with Hope as winged hero Wasp and once again suits up as Ant-Man.

“The film has both the female heroine and the villain,” noted Lily, referring to the Ghost, played by Hannah John-Kamen. “It’s very exciting time for all of us women in the MCU to be recognized, and I am incredibly grateful for Marvel to bring women in the forefront.”

The duo talked very little about the film due to Marvel’s strict no-spoiler policy, including concerning the widespread rumor that the characters’ adventure in the quantum realm will affect the upcoming fourth Avengers installment. But they said the relationship between parents and children could be part of what sets the film apart from other MCU films.

“Family tone, the humor and the fact that we’re playing people who are not born with superpower,” said Rudd, talking about why his character -- seemingly the only MCU hero most worried about making ends meet -- is relatable to general audiences.

“It takes place on earth, not on outer space, and it is a particularly relatable movie in the franchise,” said Lily.

“Ant-Man and the Wasp” will opens in Korean theaters on July 4.