MakeUs is a startup that creates mobile content about topics ranging from music, food and traveling to beauty, for Facebook and YouTube. It is followed by more than 330 million users on social network sites.

The firm runs a music channel called “Dingo Music” which is gaining popularity for providing music videos adjusted to the screen ratios of mobile devices.

SKT’s investment in the startup is aimed at reinforcing its music platform slated for launch later this year. 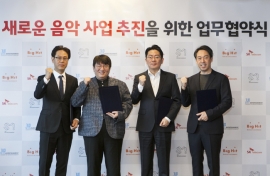 Earlier this year, the mobile operator announced it would build an artificial intelligence-powered music streaming platform that will recommend lists of songs and other video content customized to users based on their preferences.

“The company understands consumption trends of mobile media by young users,” an SKT official said. “Through the investment, we will work together to find ways to connect artists with users more closely.”

SKT had owned Melon, the No. 1 music streaming platform here, until 2013, when it was sold to Kakao.