It will empower Korean merchants with its new retail initiatives and allow them to leverage on Alibaba’s third-party mobile and online payment platform Alipay, the group said. 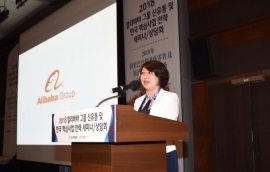 During Alibaba’s conference on Monday on its business in Korea, Alibaba said Korean brands are invited to actively use Alibaba’s omni-channels from online to offline to enter the world’s largest retail market.

According to the Ministry of Commerce of the People’s Republic of China, the country plans to import $8 trillion worth of products in the next five years for the population of over 1.3 billion.

Korean sellers have seen gross merchandise volume increase by 45 percent from 2015 to 2017, the company said.

“There are some tens of thousands of stores, F&B places, duty-free shops, department stores, and convenience stores that accept Alipay in Korea. We will continue to expand that figure and support Korean offline merchants to sell products and services to Chinese tourists by enabling Alipay,” Chung said.

On Monday, Tmall Global also signed memorandums of understanding with 17 Korean cosmetics brands including 23years old, Clubclio, Dermafirm and Mediheal, as part of its efforts to support Korean companies in marketing and promotion strategies.