Music festival brings together 180,000 in Seoul for performances by 103 artists


As RL Grime was firing up the crowd on Saturday evening, the raindrops begin to fall on the scantily-dressed fans at Ultra Korea 2018. By the time Steve Angello came on the stage, the unprepared festival-goers were drenched.

The downpour, however, did not deter the parade of music enthusiasts that turned up at Jamsil Olympic Complex in Seoul from enjoying performances by EDM, dubstep, electronic rock and even gangster rap artists.

If anything, the pouring rain only fired up the already-excited fans as they continued to party as they had been doing since Friday. 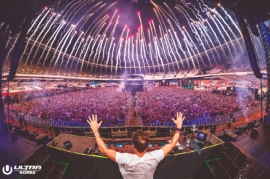 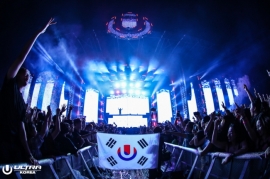 The shower that soaked the fans felt almost like a treat for the heated crowd who welcomed The Chainsmokers -- the last act of the night -- onto the Main Stage.

“This is the best crowd ever!” shouted Andrew Taggart into the mic, as the duo treated the crowd to their hits “Closer” and “Something Just Like This” which are wildly popular in Korea.

Thousands were singing “If we go down, then we go down together!” of “Paris” as the duo egged them on to crank it up.

The party went on until Sunday, when the seventh annual Ultra Korea wrapped up with the highest turnout in its history with 180,000 attendees.

A total of 103 artists were featured, including Axwell & Ingrosso, Galantis, Carl Craig, Zhu, and Above & Beyond, who took the Main Stage for the last time on Sunday. 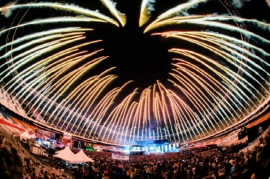 The excitement wasn’t confined to the Main Stage. Rap legend Ice Cube and Modestep were the headliners that made sure there was plenty of action on the Live Stage, along with Korean artists Durnken Tiger, Yoon Mi-rae, Bizzy, Dok2 and CL.

The addition of rapper Ice Cube and other artists showed Ultra Korea’s effort to extend beyond EMD to hip-hop, techno and trap along with other sub-genres.

Zedd, who took to the Main Stage on Friday, pumped the fans up even more by adding to the mix “Fake Love“ by BTS, the hottest thing going on in the Korean music scene today.

One letdown may have been the absence of the Swedish House Mafia repeating their onstage reunion as they did on Ultra Music Festival’s flagship event in Miami; the members performed as separate acts.

The last night of the three-day festival was accompanied by fireworks while David Guetta performed onstage, wrapping up a colorful three days of borderline insane rave that scorched the Korean Peninsula.