The Korea Herald is publishing a series of interviews with experts in the intellectual property sector. This is the 16th installment. -- Ed.

Responding to the fast-paced advancement of digital culture and replication technology, publishing copyright laws around the world have evolved in a way to expand creators’ range of rights over their work of originality and to toughen penalties upon infringements.

This black-and-white logic of “creator versus infringer,” however, may no longer be valid in an age in which contents are increasingly created upon convergence of multiple resources and artificial intelligence is rising as an unprecedented type of creator, according to a copyright and digital publishing expert. 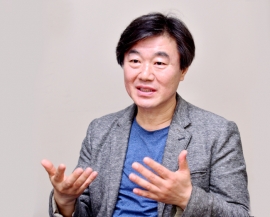 “It is inevitable that law should always lag a step behind technological evolution and the entailed social changes,” Kim Ki-tae, professor of digital contents creation at Semyung University and chairman of the Korea Digital Publishing Society, told The Korea Herald in an interview.

“Especially the current copyright protection system, though it has made considerable adjustments down the road, is still largely affiliated with the predigital printing culture.”

The most distinguished and disputed example in the recent years is the appearance of “The Day a Computer Writes a Novel,” a Japanese narrative novel written by artificial intelligence that came close to winning a prize at the third Nikkei Hoshi Shinichi Literary Award in 2016.

“Some claimed that it was the human developers of the AI who actually deserved the recognition and others disputed that it was an insult to the literary prize, while a limited few even suggested that AI should be granted some level of copyright at some point in the future,” Kim said.

But this entire discussion would be of no use if technology has already reached a stage when it was no longer possible to draw a clear line between human creation and AI creation, he added.

”Without knowledge that the novel was written by machine, one might just acknowledge the ’copyright‘ of the hypothetical ’human‘ author and ironically deter others who infringe on its content,“ he said.

”The truth is that our incumbent legal frame is insufficient to embrace these burgeoning technological upheavals.“

As an intermediary phase bridging the conventional prints and AI creations, it is the e-publication business that is currently undergoing drastic changes, according to the digital publishing expert.

The object of publishing copyright, which for centuries has been limited to texts, has now come to include various forms of digital data such as graphic designs, illustrations, photographs and music, Kim explained.

“The related regulations and perceptions, however, fail to keep up with such changes of our modern digital world,” he said.

“For instance, if a publisher applied for an e-publication certification upon a corporate address book or a set of drawing sheets, should this be recognized as an e-book and subject to additional tax exemption as in the case of printed books?”

Under South Korea’s tax law, publishing businesses and publication distributors are exempted from value-added taxes, considering the public interest to which they are seen as contributing.

“There is definitely a gray area here, and this is why the publishing industry nowadays requires an extensive variety of experts dedicated to computer science, legal affairs, human studies, journalism and art,” Kim claimed.

“Under the conventional publishing system, all that was needed for legitimate publication was the consent of a specific author or at most, a group of authors,” Kim said.

“But given the current multimedia environment and legal restrictions, it often takes an endless list of licenses for the author’s text, photographs, voice records, readers’ responses and so forth, which would eventually dampen creation and distribution.”

While maintaining a stern penalty system on intentional violators, it is necessary to lower the bar for general results of creation, according to Kim.

“Industrial property rights such as patent, trademark and design rights, which guarantee protection upon registration, tend to underline the legal framework and enforcement,” he explained.

“But copyright, a (nonindustrial) intellectual property right, is marked for its social interaction and should thus be addressed from the perspective of ethics and education, rather than law enforcement.”

Semyung University’s digital contents creation department is one of the limited academic courses here to offer classes on copyright theories and related ethics, according to Kim.

“Korean university students tend to be highly insensitive to plagiarism, and this problem traces back to their earlier years of education, when they had not been given proper guidance regarding the problem and consequence of illegitimate copying,” he pointed out.

“A systematic solution would be to establish a copyright ethics subject as a mandatory course in teachers’ colleges, as a first step of creating a social consensus in the long term.”