A financial technology startup and major credit bureau are locked in a fight, with the former claiming the Korea Credit Bureau violated intellectual property rights on the startup’s technology to allow user verification with a single finger touch on a smartphone.

Complaints were submitted to the Ministry of SMEs and Startups on June 1 and 4. The startup also seeks to bring the case to Korea’s antitrust body, the Fair Trade Commission, by no later than Tuesday.

A patent litigation against KCB is also on the table, added the startup, which specializes in payment system technology ranging from near-field communication to authentication via smartphone.

KCB has strongly denied the allegations, adding it is considering suing Hankook NFC for defamation. KCB is one of the two Korean agencies devoted to collecting consumers’ credit information to determine their creditworthiness. 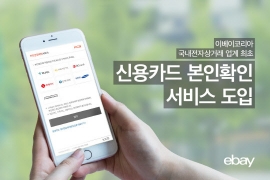 This came after KCB unveiled a plan on May 22 to team up with eBay Korea to enable its online customers to use card information stored in smartphones -- including fingerprints -- for user verification when creating a new account or paying online. User identity is to be verified when a user chooses a card on a smartphone and touches his or her finger to the phone.

Through this, credit cards are able to substitute conventional tools for user verification, such as public electronic certificates or smartphones, in a more convenient way.

While Hankook NFC has argued the original technology for authentication belongs to the startup, KCB has hit back, saying the company is using technology already owned by the respective card companies in Korea, not by its former business partner.

Hankook NFC worked together with KCB in 2015 and formally sealed a contract in March 2016 to create a credit card-backed online user verification system. According to the plan, KCB was to process online authentication requests and forwards it to Hankook NFC, so that credit card information by requesters would be encrypted, using near-field communication technology.

Crucial in the system was an entity to match the encrypted requester information to private information from card companies.

But the two companies ditched the plan to launch the service in May 2016 because card companies were not given the nod by the state-led Korea Communications Commission to process private information at the time. The contract was terminated in March 2017.

KCC moved to authorize the seven card companies to manage and process users’ private information on their own late last year. Hankook NFC, meanwhile, proposed resuming the service with the credit bureau in March this year. But KCB refused, pledging not to launch a customer service based on the partnership.

KCB’s launch of a user authentication service is a “breach of principle of good faith,” said a Hankook NFC official.

“KCB has appropriated our technology, and this is an act of ‘gapjil’” Park Sung-ki, director at Hankook NFC, told The Korea Herald, using a Korean term referring to an abusive action by those with power over subordinates.

Park added that all the technologies used in KCB’s partnership with eBay Korea had been shared with KCB when the partnership was valid.

KCB officials refuted, telling The Korea Herald the company did not renege on the pledge.

KCB’s role in the partnership with eBay Korea is limited to “brokerage services” -- processing users’ online authentication request -- between the online shopping platform and card companies, according to the officials.

“Anyone can take issue with a similarity in services, and ordinary people cannot tell whether the similarity means an IP rights infringement,” said an official at KCB’s digital business department, who declined to be named.

He added that KCB’s new partnership with eBay Korea went through a review by a patent attorney.

Hankook NFC holds patents including “system and method for performing user authentication using a fingerprint, and the financial card information stored in the mobile communication terminal,” registered in 2016 and “system and method for user authentication by using a physical financial card and mobile communication terminal,” in 2015.

Officials at KCB and KCC, however, said the two patents do not protect the entire system of using fingerprints on mobile phones.